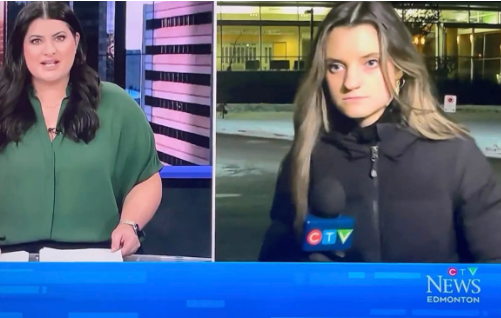 A young Canadian journalist had a medical issue on Sunday while she was in the middle of a live broadcast.

While reporting from the scene for the Canadian television network CTV, Jessica Robb began slurring, losing her words, and appearing to be about to pass out during the live broadcast as she was having a conversation with the anchor Nahreman Issa. CTV abruptly ended the show.

Must Watch: Young CTV News reporter Jessica Robb starts slurring her words, appears to go into medical distress, and looks like she’s about to collapse live on air during the 6pm show tonight. pic.twitter.com/tVrmtXvvyR

In response to one of their reporters’ medical issues, CTV Edmonton issued a statement.

“Thanks to everyone who inquired about our reporter who became ill during the 6 p.m. News. Jessica Robb is feeling better and is now resting.”

PROGRAMMING NOTE: Thanks to everyone who inquired about our reporter who became ill during the 6 p.m. News. Jessica Robb is feeling better and is now resting.

Jessica Robb released a statement before making her account private.

“I won’t bury the lede: i’m okay. Thank you to everyone who has reached [out], my cameraman Sean McClune for being there for me, & Nahreman Issa for being an absolute pro as usual,” Robb posted on Twitter.

People on social media thought it was strange that she abruptly made her Twitter page private.

From Jessica Robb – 20 minutes ago – still it seems sus and is she the only one with access to her Twitter?? pic.twitter.com/LErrU4RFQT

Many people on social media believed that the woman’s COVID immunization was to blame for her unexpected sickness.

Robb tweeted in April that she was grateful for her third COVID vaccination shot after contracting the disease.

“Consider this my official out of (the physical) office. Feeling very lucky to be vaxxed ×3 & that I started isolating as soon as symptoms started,” she stated.

At least Jessica Robb was triple “vaxxed.” Her stroke on live TV could have been worse. 🙏 #StopTheShots pic.twitter.com/xPYzLl38qO