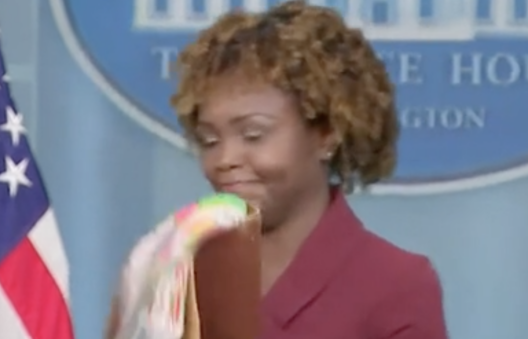 Karine Jean-Pierre, the far-left wing press secretary for the White House, walked out of the news conference on Thursday after arguing with a reporter. Jean-Pierre is used to being handed softball questions by the leftist media at all times, so it’s no wonder that she can’t handle the fire.

“Karine, why is it so hard to take the question on the U.S.-Africa summit when the President will meet 50 African leaders, the biggest gathering of leaders of this administration? Why is it hard for you to give me a question?”

KJP answered, “It is not hard. I’ve answered — would you let me answer the question or — okay. I tried to answer your question. Go ahead, sir. Go ahead. I just tried, but you wouldn’t let me.”

The reporter then tried to ask again. “Let me ask you a question on the U.S.-Africa summit..“

Jean-Pierre replied, “I literally just tried to answer your question. You shut me down. So now your colleague is going to —“

The reporter once again tried to get Jean-Pierre’s attention by saying,  “Let me ask the question first before you answer.”

In which the White House Press Secretary angrily yelled,  “Okay. Thanks, everybody. I’ll see you tomorrow.”