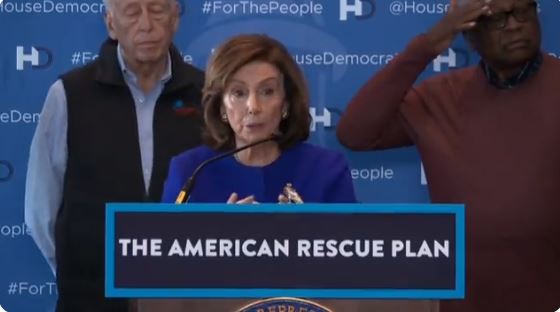 According to Democrats, the inflation is caused by Putin or something else. They absurdly assert that government spending is in no way responsible for the sky-high inflation we’re seeing, inflation higher than it has been in four decades, despite the fact that the government is pumping trillions of dollars into the economy.

Biden: "I'm sick of this stuff … the American people think the reason for inflation is government spending more money. Simply not true!"

She also used the occasion to criticize Putin for the rise in gasoline prices.

Perhaps we can assume that Putin was the one who shut down the Keystone XL project, began limiting new drilling permits, particularly on federal territory, and promoted electric cars as an answer to rising gas prices.

.@SpeakerPelosi: "When we're having this discussion, it's important to dispel some of those who say, well it's the government spending. No, it isn't. The government spending is doing the exact reverse, reducing the national debt. It is not inflationary." pic.twitter.com/6HKE5gX2SP

Nevertheless, no one believes nasty Nancy and Joe Biden, no matter how much they attempt to shift blame or even insist that enormous government spending is a good thing. They’re right that Brandon isn’t to blame for all of our inflation troubles, but that’s it.