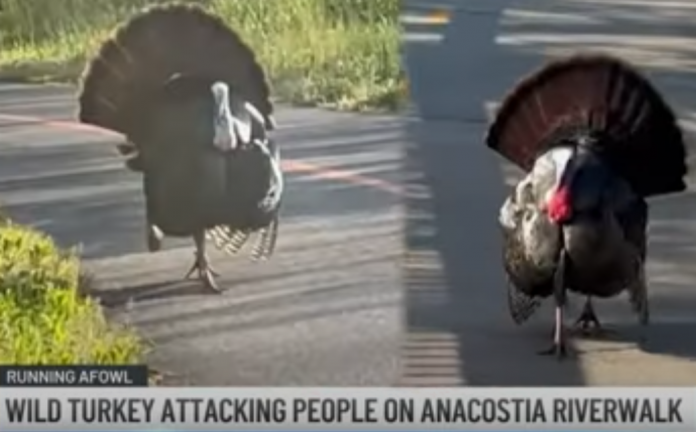 A rabid fox protecting its burrow and infant kits was discovered and executed just a few weeks ago after attacking and biting multiple individuals outside the Capitol complex in Washington, D.C.

A wild turkey, another member of the animal world, has been harassing and assaulting individuals in the Washington, D.C. neighborhood.

The enraged bird has been seen pestering people along the Anacostia Riverwalk Trail, and multiple government organizations, including the National Park Service, the Agriculture Department, and the Department of Energy and Environment, are apparently on the lookout for it.

A three-and-a-half-foot-tall male turkey with a blue head, pink chin flaps, black feathers on his chest, and golden fanned tail feathers has been identified as the culprit.

Authorities are on the lookout for a male turkey who is harassing bikers in Washington, DC. pic.twitter.com/N817eGKdYa

It has assaulted a number of individuals walking or riding bikes along the scenic river route, with at least three of the victims requiring medical care for puncture wounds and receiving tetanus injections.

One of the turkey’s attacks was recently captured on camera after it assaulted and nearly knocked a man called Dede Folarin off his bike, only to pursue after and harass a lady farther down the route, driving her off her bike in an attempt to protect herself.

According to Dan Rauch, a DOEE Fisheries and Wildlife biologist, the turkey population in D.C. is really rather robust. and the adjacent regions In the district, there are at least a hundred, if not two.

The violent turkey appears to have crossed state borders to assault and harass people in Maryland, and is being pursued by the Maryland Department of Natural Resources and the Prince George’s County Parks and Recreation Department, in addition to federal agencies.