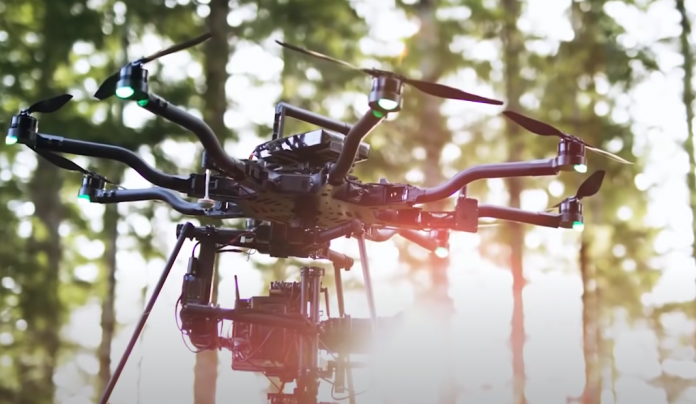 Police in Canada have apprehended a drone that crossed the border from the US with a shopping bag containing over a dozen firearms, but only after the operator crashed the aircraft into a nearby tree.

Residents in the village of Port Lambton, north-east of Detroit, reported seeing a stranger maneuvering a commercial drone, prompting officers in southern Ontario to respond.

However, the drone operator lost control of the aircraft, which crashed into a tree before leaving in a waiting vehicle.

Police used a bucket truck to rescue the drone, which was fastened to a plastic shopping bag with metal carabiners and electrical tape.

Officers recovered 11 pistols inside, the majority of which were illegal in Canada. The serial numbers on a black pistol appear to have been sandblasted out in one of the photographs supplied by authorities.

Officers believe the drone crossed the St Clair River, which separates Canada and the United States, on its way east from Michigan. However, investigators have no idea who was flying the drone or who the illegal delivery was meant for.

Many pistols used in criminal activity in Canada are brought in discreetly from the United States. Smugglers have previously evaded police by using freight trucks, passenger vehicles, and planes.

The deployment of a drone implies that organizations are experimenting with new tactics, although it’s unclear if this is the first time a drone has been discovered. A request for comment from the Ontario provincial police force was not immediately returned.