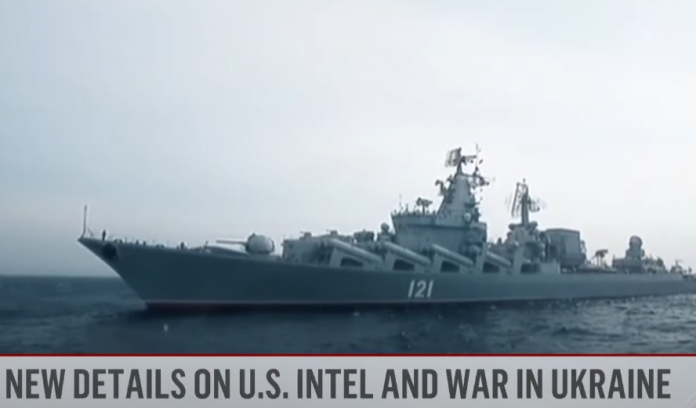 Ukraine received some assistance from the US when it successfully attacked Russia’s prized warship with anti-ship cruise missiles last month.

After spotting the Russian battleship in the Black Sea, Ukrainian soldiers contacted their American contacts for confirmation that it was the Moskva, according to people familiar with the situation. The United States answered that it was and supplied information on its position. However, it is unclear whether the US was aware that Ukraine would hit the ship, and the US was not engaged in the decision, according to the sources.

On April 14, the ship sunk after being hit by two Ukrainian cruise missiles, handing a major setback to the Russian military.

The incident, first reported by NBC News, reflects the Biden administration’s increasingly forward-leaning posture when it comes to sharing intelligence with Ukraine, as part of a broader policy shift toward assisting Ukraine in decisively defeating Russia on the battlefield while significantly weakening its military.

However, it raises doubts about the US and Russia’s red lines when it comes to military assistance to Ukraine.

The United States has been providing Ukrainian forces with intelligence on Russian troop movements within Ukraine for months, including intercepted conversations concerning Russian military preparations. It also gives Ukraine marine awareness data so that it can better comprehend the threat presented by Russian ships in the Black Sea, many of which are launching missiles towards Ukrainian shores.

However, there are obvious limits to what the US will reveal.

The US has thus far refused to assist Ukraine with intelligence on prospective targets within Russia. While the data the US shares concerning Russian army movements within Ukraine can contain specifics such as vehicles and types of soldiers at a given place, officials have stated that the US has not provided Ukraine with knowledge about the presence of individual Russian military commanders.

Moscow has recently focused its efforts on the Donbas area of eastern Ukraine, which has been at the forefront of the Russia-Ukraine war since 2014.

According to Lt. Col. Denys Prokopenko, a Ukrainian commander at the factory, heavy battle resumed inside the Azovstal steel complex on Thursday. He alleged that the Russians had disregarded their promise to enable residents to evacuate via evacuation routes on Thursday.

Between 200 and 300 citizens, including 30 children, are believed to be still inside the factory. It has been pummeled by land, sea, and air since Sunday.