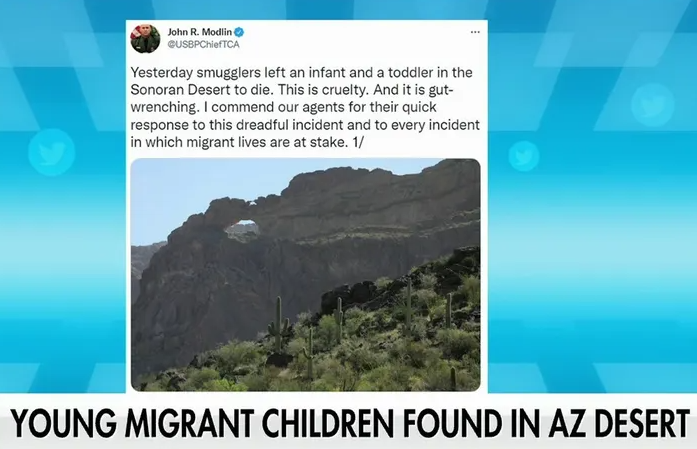 A four-month-old and an 18-month-old baby were saved by Border Patrol agents on Thursday after they had been abandoned in the scorching Arizona desert. The incident was exploited by officials to show the brutality and “heartlessness” of people traffickers.

It is horrible that yesterday traffickers abandoned a newborn and a toddler in the Sonoran Desert to perish, according to Tucson Sector Chief Patrol Agent John Modlin. And that is heartbreaking.

The four-month-old youngster was discovered to be unconscious when agents arrived at the kids, according to Modlin, who hailed the agents for their rapid response.

“Agents found the infant was unresponsive; thankfully, we were able to revive her and avert tragedy. The heartlessness of smugglers cannot be underestimated.”

The rescue is the most recent horrifying incidence of children being abandoned by people smugglers at the border. Normally, Border Patrol will process unaccompanied minors into the country and place them in the custody of Health and Human Services. They will then be taken across the nation to be reunited with a sponsor or parent, if one is already there, if applicable.

When 5-year-old and 3-year-old sisters were rescued in Santa Teresa, New Mexico, last year after being dumped down the barrier and having their things thrown after them, the practice of abandoning youngsters was brought to light.

Agents of the Border Patrol frequently find lost or abandoned migrants, including adults and children, at dangerous points along the border. Agents located two missing migrant women who were very dehydrated on Thursday in Texas. Two other adults were also saved by agents in the San Diego Sector, including one who was unable to walk and had been left behind by smugglers.

It is one of the jobs that agents must complete while dealing with an ongoing migrant surge into the US. This fiscal year’s migrant interactions have already surpassed the previous record of 1.7 million, totaling more than 2 million so far.

In addition to addressing core issues like poverty, corruption, and climate change in Central America, the Biden administration has tried to increase the number of legitimate asylum paths. Republicans and a few border agents have accused the administration of undoing the border security and internal enforcement measures that were implemented under Trump.