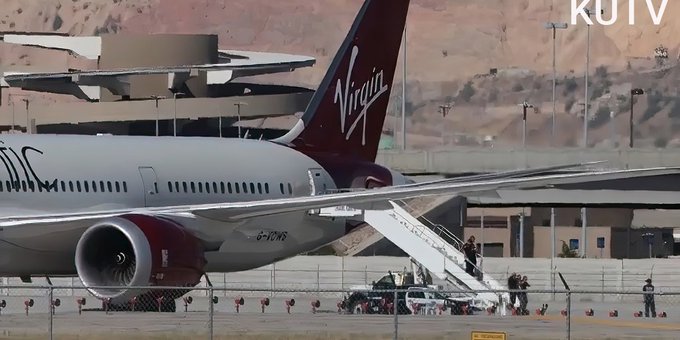 Due to a disruptive passenger, a commercial flight from London to Los Angeles was forced to depart from its original course on Tuesday, according to officials.

After the passenger’s disruption, Virgin Atlantic flight 141 was forced to land before reaching its intended destination of Los Angeles International Airport (LAX), according to a Virgin Atlantic representative.

The disruptive passenger was arrested when the aircraft touched down at Salt Lake City International Airport (SLC), according to the spokesperson.

To protect the passengers, the airline diverted the flight.

🚨 BREAKING 🚨 Reports of an #unruly #passenger aboard #VirginAtlantic from London-LAX caused plane to divert to #SaltLakeCity after he allegedly fought passengers trying to approach cockpit. Airport officials tell me it happened around 4p but couldn’t provide details. Developing

On Tuesday, July 26, the VS141 flight from London Heathrow to Los Angeles was diverted to Salt Lake City, where the crew was contacted by law enforcement officials because of a disruptive passenger.

“The safety and wellbeing of our customers and crew is always our top priority and we don’t tolerate any behavior that compromises this. We always want our customers to have the best experience when they fly with us and our cabin crew are highly trained to deal with any individuals that may impact that experience for others,” the airline said.

After an almost four-hour delay, the Virgin Atlantic spokeswoman notified Fox News Digital that the flight was able to continue on to Los Angeles. The airline expressed regret to the customers for the trouble.

Around 7:30 p.m., the Virgin Atlantic aircraft touched down at LAX.

Usually, a trip from London to Los Angeles takes 10 to 11 hours.