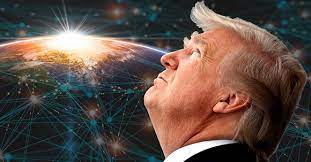 In an interview with Sunday’s former President Trump, Trump claimed credit for the race to the moon between billionaires Richard Branson and Jeff Bezos, and said that the Space Force was the catalyst.

Maria Bartiromo, Fox News’s Sunday Morning Futures host, noted that Branson was the first billionaire to go into space. She then asked Trump his thoughts and said that the Space Force was the new military branch since 1947.

Trump stated: “We’re very proud of that” – “It was close to 75 years. It was the Air Force. And now we did Space Force, which is going to be so vital. And we not only did it. I mean, it’s up and running and really great.”

Russia Has It. China also has it. They were far ahead of us. He said, “And I got it started.”

Bartiromo also asked Trump about why billionaire business leaders focus on space. He pointed to Trump’s frequent critic Bezos. Bezos, who left his position as Amazon CEO in order to focus on Blue Origin, his aerospace company, was the answer.

“Better them than me,” the former president said. “I would rather see Richard in the plane today than me, in the spaceship. … Richard loves it, and Bezos loves it. And a lot of rich guys love space, OK? You will explain that someday. But they do love space.”

“They love sending rocket ships up. And I made it possible for them to do this. I actually said to my people, ‘Let the private sector do it,'” Trump continued.

“These guys want to come in with billions of dollars. Let’s lease them facilities because, you know, you need certain facilities to send up rockets. And we have those facilities. We have the greatest facilities,” he added.

“And now, because of what I did, we are leading the pack in space by far,” he said.

Branson, the founder of Virgin Galactic, successfully returned to Earth after a trip to the edge of space that lasted around 90 minutes on the SpaceShipTwo Unity spaceplane.