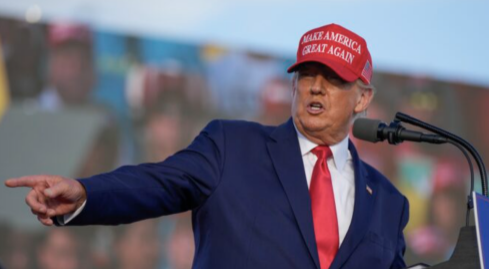 In Palm Beach, Florida, where he had just left a polling place, Trump told reporters that he had cast his ballot for the Republican incumbent governor. Democrat and former governor Charlie Crist is DeSantis’ opponent.

Prior to taking the stage at a rally in Ohio on Monday night, there were reports that Trump might formally declare his candidacy. These speculations, however, turned out to be untrue, and he now claims to be making a significant announcement on November 15, one week after the midterm elections.

Trump said that announcement would be made at his Mar-a-Lago home on Monday.

Tens of millions of people are expected to cast ballots in Tuesday’s key midterm elections. Numerous experts predict that Republicans will almost certainly win the House and stand a decent chance of winning the Senate.

Recent polls have shown that DeSantis is significantly ahead of Crist and that Rubio is ahead of Democrat Val Demings. DeSantis became a breakthrough star for the GOP during the COVID-19 outbreak for generally refusing to enforce lockdowns and vaccine mandates.