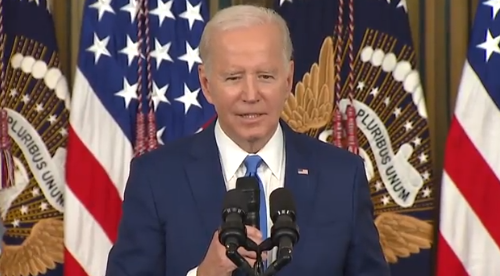 President Biden demanded on Wednesday that Elon Musk, a billionaire businessman who recently acquired Twitter with the professed intention of reinstating free speech values, be the subject of a federal probe.

“Do you think Elon Musk is a threat to US national security? And should the US — and with the tools you have — investigate his joint acquisition of Twitter with foreign governments, which include the Saudis?,” at his third solo White House press conference, Biden was questioned by Bloomberg reporter Jenny Leonard.

When asked “How?”Biden said that there’s a lot of ways but did not offer any further explanation.

Since 2011, Saudi Prince Alwaleed bin Talal has owned stock in Twitter through his company, Kingdom Holdings, making him the second-largest shareholder behind Musk.

A reporter calls him out by asking "HOW?!"

A clueless Joe Biden panics, mumbles, and says, "there's a lot of ways"

Last year, Biden dissed Tesla by declining to invite the company to an e-vehicle expo at the White House, ostensibly because it doesn’t have a unionized staff. Tesla is the leading seller of electric vehicles. However, SpaceX is given significant contracts by the US government.

In a victory lap after Democrats fared better than anticipated in the midterm elections — with control of the House and Senate still up in the air as vote-counting continues — the president called for a probe into Musk.

In the same news conference, Biden dismissed questions about his own family’s connections to foreign companies, saying that the American public wanted to move on and that the topic was almost comical.

Musk purchased Twitter after the company’s staff began to censor more and more content that was critical of Biden, including prohibiting the publication of The Post’s explosive articles from October 2020 that used documents found on Hunter Biden’s laptop and connected Joe Biden to his son’s business ventures in China and Ukraine.

If they reclaim subpoena power, Republicans have pledged to investigate Joe Biden’s role in his son Hunter’s and brother James’ international activities.

According to the laptop records, Joe Biden frequently visited with Hunter and James Biden’s foreign contacts, including those from China, Russia, Mexico, Kazakhstan, and Ukraine, while serving as vice president and in the years before he was elected president.

The eldest son is currently being looked into for potential money laundering, tax fraud, and unlawful foreign lobbying.

Despite his own press office’s assertion that Musk’s purchase of Twitter was not the subject of a federal investigation, Biden called for one.

At a conference on October 24, White House press secretary Karine Jean-Pierre categorically disputed that Musk’s takeover of Twitter had been subjected to a national security review.