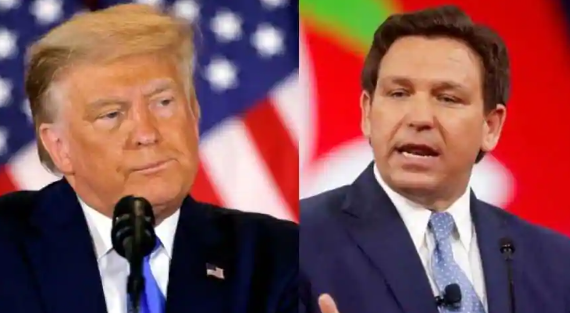 Donald Trump flew in on his iconic – and recently refurbished – Trump Force One to Latrobe, Pennsylvania to make one last campaign stop for a number of candidates. He appeared to have raised his personal prominence at the pre-midterm rally as well.

The Daily Wire set up the barb:

Trump made the attack while campaigning in Pennsylvania and he used a questionable poll that was conducted months ago, just shortly after the FBI’s criminal investigation into the former president’s handling of government records was made public following the Bureau’s raid on Mar-a-Lago.

Trump, using those August figures for about whom voters prefer in 2024, remarked that he was still running away with a huge majority of support. However, he did so in a way that has been widely seen as an unnecessary attack on Florida’s outstanding governor Ron “DeSanctimonious.”

Take a look as Trump badmouths his top political rival before a pivotal midterm election where every Republican vote counts:

Trump at 71…Ron DeSanctimonous at 10 percent..Mike Pence at 7 – oh, Mike’s doing better than I thought.

As Chip Roy, one of the few congressional Republicans worth a darn, shared in his tweet that Trump’s unprovoked line of comments can also be seen from a different perspective:

Or… Ron De…SaidNoToFauci… that’s another angle…

The crowd doesn’t appear to respond to the statement very much on the whole, as can be heard in the audio recording. It’s possible that they weren’t prepared and didn’t have time to consider the statement. Maybe they didn’t like it. Maybe they were just taken aback by the odd anti-DeSantis campaign only days before Florida voters go to the polls.

DeSantis is an extremely effective conservative governor who has had real policy wins and real cultural wins. Trump isn’t going to be able to take this one down with a dumb nickname. He better have more than that up his sleeve. https://t.co/dOpugSGEBP

DeSantis is an extremely effective conservative governor who has had real policy wins and real cultural wins. Trump isn’t going to be able to take this one down with a dumb nickname. He better have more than that up his sleeve.

“There was no good reason for Trump to attack DeSantis last night,” said Tim Runs His Mouth.

“What an idiot. DeSantis is a far more effective leader of the Right than Trump was, if, that is, you expect a leader to get a lot done, rather than just talking about it and owning the libs,” said Rod Dreher.

“Trump missed the mark with the quip about DeSantis tonight. It’s four days before the Midterm; the Governor is facing re-election and is a MAGA ally. No need for friendly fire. Keep the guns targeted on the Left,” said Election Wizard.

Once more, there was no applause from the audience, and almost all of the conservative Twitter users opposed it. Those responses ranged from confused to outraged. Aside from it not moving the needle in terms of GOP support, it provides plenty of fodder for political opposition, which will no doubt capitalize on the moniker while also celebrating the in-fighting.

The fact that Trump will speak tonight in Miami, Florida in support of Marco Rubio without the Florida governor adds to the absurdity of the scenario. DeSantis reportedly wasn’t even invited.

It remains to be seen how Trump will be received in DeSantis’s home state this evening. No doubt, this clip will have been seen by many of those plugged into politics – especially those willing to attend a political rally.

Fox News pointed out that there is more to the story in addition to Trump’s attempts to put some distance between himself and his main 2024 rival – Fox reported:

“A BIG MISTAKE!” Trump posted on Truth Social in response to the move.