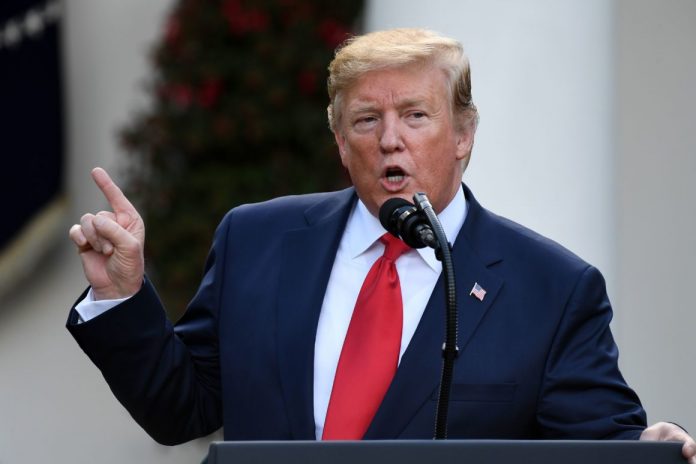 “Huge findings in Arizona!” he said in a statement Friday. “However, the Fake News Media is already trying to ‘call it’ again for (Joe) Biden before actually looking at the facts—just like they did in November! The audit has uncovered significant and undeniable evidence of FRAUD! Until we know how and why this happened, our Elections will never be secure.

“This is a major criminal event and should be investigated by the Attorney General immediately. The Senate’s final report will be released today at 4:00 PM ET. I have heard it is far different than that being reported by the Fake News Media.”

According to the Arizona Republic, the long-running recount of 2020 county voting results had proved that President Biden won. According to the outlet, it also confirmed that Trump did not steal the election.

The paper said that the information was from an early version of a report for the Arizona Senate.

Cyber Ninjas, which is the lead contractor for the state Senate, provided multiple drafts of the report to the newspaper.

The hand count revealed Trump received 45,469 fewer votes than Biden. The county had reported he had lost by 45,109.  Still, the draft reports maintained the election results are inconclusive, according to the Republic.

The Republic reviewed draft reports that focused on questions regarding the election process, voter integrity, and other issues. However, the newspaper pointed out that these findings were misleading by election analysts.

Trump did not mention any media outlets, but he said, “The Fake News lies about the Arizona audit report!” Leaked reports show that there was enough fraud, mystery votes and fake votes to alter the outcome of the election four or five times.

“The number includes 23,344 mail-in ballots, despite the person no longer living at that address. Phantom voters! The official canvass does not even match who voted, off by 11,592—more than the entire Presidential Election margin.

“In addition, election data appears to have been intentionally deleted, and ballot images were ‘corrupt or missing.’ This is not even the whole state of Arizona, but only Maricopa County. It would only get worse!

“There is fraud and cheating in Arizona and it must be criminally investigated!”

However, CNN reported that Trump has often targeted this outlet. The Republican-led Maricopa County board of supervisors stated that the draft report demonstrates the fact that the county’s vote totals are accurate.

“You don’t have to dig deep into the draft copy of the Arizona Senate/Cyber Ninja audit report to confirm what I already knew — the candidates certified by the Maricopa County Board of Supervisors, Governor, Secretary of State and Attorney General — did, in fact, win,” board chairman Jack Sellers, a Republican, said in a statement.

Later in the day, Trump made this statement: “CNN and New York Times, Washington Post and other Lamestream Media are feeding large scale misinformation to the public about the Arizona Audit. We were proud to win the Audit, which was a major victory for democracy. This shows how corrupt the Election was. Arizona State Senate hearing is currently underway and the information about what happened is horrendous–a larger Scam than expected!”