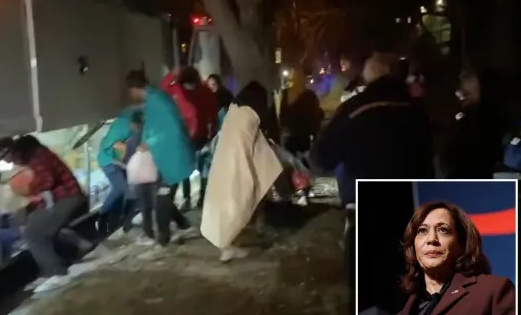 According to 7News and CNN, the buses, which are thought to originate from Texas, dropped off the asylum seekers late on Saturday in front of the Naval Observatory, where Harris resides, in 18-degree temperatures.

The media reported that despite the frigid temperatures, the migrants were seen simply wearing T-shirts or thin sweaters.

They received blankets and boarded a different bus headed for a nearby church.

A video posted by reporter Christian Flores of 7 News DC showed the Migrant Solidarity Mutual Aid Network assisting the third bus of migrants who were covered in blankets.

The bus was from Texas, according to an individual aiding the migrants, who notified Flores.

Which nation the immigrants initially came from is unknown.

Greg Abbott, the governor of Texas, has already bused immigrants to the Vice President’s residence.

Numerous immigrants who claimed to be from Nicaragua were seen earlier this month getting off a bus in front of Harris’ house while others were bundled up against the morning chill.

According to Abbott’s office, more than 8,400 migrants have been sent to only D.C. since April, NBC News reported earlier this month.

Additionally, over 5,000 adults and children have been dispatched to New York City and Chicago to protest what they believe to be the Biden administration’s inability to address the border crisis and stop the flow of immigrants into the country.

More than 125 migrants arrived in Harris in September and October alone, thanks to at least three buses from Texas.