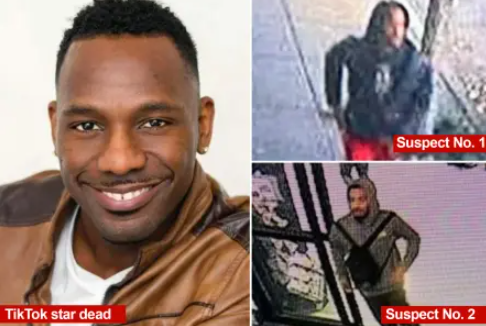 Brandon “Boogie B” Montrell, a popular TikTok user, was shot and died by a stray gunshot on Friday while Christmas shopping in New Orleans with his grandmother, according to his distraught mother, who then railed against the city’s Democrat-controlled officials.

The 43-year-old social media star and comedian was found dead in a parked car at the Warehouse District’s Rouses grocery store at roughly 4:07 p.m. the previous afternoon, according to Montrell’s mother, who made the confirmation on Saturday.

The devastated mom blasted crime in Louisiana’s most populated city — and the leaders who need to “do their jobs.”

“My son was not just the victim of a stray bullet,” Sherilyn Price said in a Saturday statement obtained by Fox 8.

“He’s the victim of decades of neglect that have left New Orleans’ youth with no hope for a future and with no real fear of consequences,” the devastated mom continued.

“It’s past time for leaders in our city and all over to do their jobs. It matters who the president is, who the governor is, and who the mayor is. Leaders create opportunities – including the opportunity to live in peace without fear of random violence.”

The victim’s identity has not been formally disclosed by the New Orleans Police Department, but it has been established that he was not the intended victim.

According to the authorities, the casualty was a bystander caught in the crossfire.

“Another one of our own was taken senselessly. We continue to ask when will it end while seeking solutions for change. Mourning has become a way of life here, but have we truly become numb to violence and destruction?” he said on Instagram.

Cantrell asserts that the recall campaign is a Fox News and racial/sexist conspiracy. However, this is a racially diversified grassroots recall.
A mayoral recall is a capital offense The last hope for New Orleans
According to a Wall Street Journal review of data from the Large Cities Chiefs Association, New Orleans, famed for its nightlife and live music scene, has the highest homicide rate of any major US city for the first half of this year.

Latoya Cantrell, the city’s Democrat mayor, is currently the target of a recall campaign due to rising violence. 53,343 valid signatures must be gathered by petitioners by February 22, 2023, in order to place the recall election on the ballot.

On Saturday, it was unknown how many people had signed the bid.

For his amusing “Hood History” series, in which he offered witty tales about the city’s lesser-known but colorful past—many of which concentrated on black American tales—Montrell was well-known on TikTok and other social media platforms.

According to a cousin who spoke to Fox 8, the comedian was born in New Orleans but had been residing in Los Angeles to pursue his showbiz career.

For the holiday, Montrell had traveled back to Louisiana to be with his mother and grandmother.

His family’s counsel said that he was waiting inside the store for his grandma to come in with the Christmas goods when he was killed.

He apparently intended to go to a friend’s comedy gig later that night at a nearby hotel.

“He was a really good guy,” family attorney and friend Juan LaFonta said. “Always pushing himself forward. Never involved with anything negative.”

Fans and friends are already grieving the funny man’s loss.

“You will be thoroughly missed my beloved brother. Thank you for the great memories. I was looking forward to us going on road and watching our dreams come true,” Ron G., a fellow comedian, commented on Montrell’s last post.

“From one historian to another; you exist beyond your existence in the legacy you have left behind, in the lessons you have left, and the thousands of lives you have touched,” fan and New Orleans resident Rubia Garcia said.

The two suspects who are thought to have shot and killed Montrell are still at large. Two people were identified in surveillance photos by the police as being involved.

Dyamonique Smith has been identified by police as a person of interest because they think she can help with the investigation even though she is not wanted for any criminal offenses, according to WDSU 6.