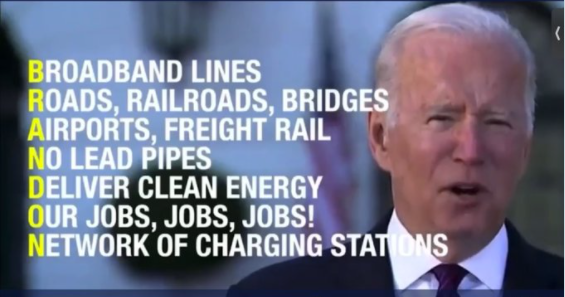 Yes, all of the points it makes are ridiculous and unfounded. And yes, it does appear to be truly terrifying, in the words of Ben Dreyfuss, “This ad looks like it was made on their phone at 3am by someone drunk in an Uber on their way home.”

Those facts alone would be enough to make the ad worth laughing at. But, even more absurdly and comically, someone felt it was a good idea to bring up the “Brandon” issue in a pro-Biden ad!

They tried to list Biden’s accomplishments using “Brandon” as an acronym, none of which are real and almost all of which aren’t exactly the issues that Americans care about.

B stands for “broadband lines.” Like everybody will love Biden that now they know he cares about internet access,.

The R stands for “roads, railroads, and bridges,” perhaps a reference to his “infrastructure bill,” which largely supported communist pet projects.

The A stands for “airports, freight rail,” which is most likely the same bill and not the California train robberies or airports crumbling under the Covid strain.

N stands for yet another concern on everyone’s attention in America: “no lead pipes.” I presume Brandon is anti-lead poisoning. That’s a rather daring stance.

D stands for “deliver clean energy,” which most likely refers to the small and expensive amount produced by wind and solar, rather than the cheap, extremely clean energy produced by nuclear and natural gas.

The letter “N” stands for “network of charging stations”.

Whoever thought if this ad, and to whomever approved this must be out of their minds!