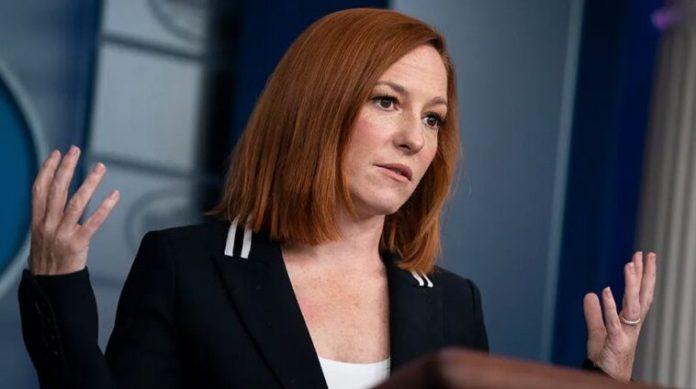 In the stable afterglow of Trump’s presidency, Team Biden liked to use the phrase “America Is Back” when Biden policies weren’t totally destroying all the trust and respect President Trump had spent four years building.

Biden would fly off to someplace and, if Biden didn’t act totally senile during the trip, his administration would trumpet it as a huge success, declaring that it showed “America is back.”

However, this phrase hasn’t been used much since the terrible summer. With the terrible Afghanistan issue, which everyone witnessed in real-time, America’s respect fell off a cliff. Team Biden couldn’t claim that “America Is Back”.

Some haven’t forgotten about the foolishness of those early days. Remember when Team Biden used to say “America is Back” while taking credit for Trump’s respect. They’re now calling him on it.

One such person is a reporter who asked Jen Psaki this:

“And one more, Jen. Besides the crisis in Ukraine, this week alone, ISIS launched the biggest attack in Syria in years; beheaded a police officer in Iraq — in a video again. The U.N. chief said that Afghanistan is “hanging by a thread.” People are starving and freezing after the United States left the country.

So is this what American leadership or “America back” look like? Can you say this is a winning foreign policy?”

That’s a real hammer blow of a question. Breitbart reports that “The journalist who asked the question appeared to be Raquel Krähenbühl of the mainstream Brazilian network Globo.” I guess the Brazilians are as macho as their terrific, very conservative president makes them appear.

In any case, Jen tried to get out of answering it, responding and saying “There was a lot wrapped up in that question. What is your question exactly?”

I’m asking: We see things happening with ISIS that we haven’t seen in years, launching a big attack in Syria and Iraq. We see people in Afghanistan hungry, starving, freezing. And the United States — I’m asking — yesterday, you were asked a question, “What happened the last year after one year the President in office with foreign policy?” And you say, “America is back.”

So I want — my question is: Just yesterday, we saw so much happening the world. Is this what “America back” means?

That question was asked without any remark. Jen was forced to answer that question because it was direct and because it cut to the heart of Biden’s administration. She was forced to defend him and avoid any further humiliating comments. She failed. Utterly. She replied:

Well, ISIS has been a terrorist organization for many years through the course, before President Biden took office. They’ve been terrorizing people for many years. That is not new, as of the last year. And we have spoken out about that at every time when it has been appropriate to do exactly that.

And the fact that we’ve had more than 100 engagements with countries around the world at a range of levels and formats, as we look to the aggressive behavior of Russia, speaks to that — speaks to — it doesn’t happen by accident. That’s why we have a united front as we’re looking at the potential actions of President Putin.

So, I think that speaks to the work the President has done over the past year.

Nice try, Jen. It was a great effort. Unfortunately, not everyone believes all of these things are happening. Trump did not make any of these things happen. Xi wasn’t a giant looking over Taiwan, waiting for a strike. Putin didn’t just move a few soldiers around to send NATO into anarchy. ISIS was defeated. It didn’t make a comeback or behead people.

Brandon is not weak, and the world responds to that weakness. This is what “America is Back” is all about.