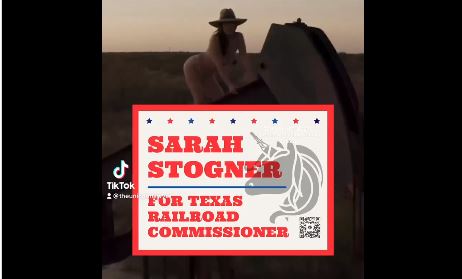 Because he likes to tweet harsh things about Jeb Bush, Rosie O’Donnell, and the Morning Joe hosts at 2 a.m., Donald Trump was said to lack presidential bearing.

Whatever concerns people had about his hilarious tweets not being dignified were blown out of the water by Republican candidate for Texas Railroad Commissioner Sarah Stogner, who recently released a ridiculous campaign video on TikTok in which she poses naked on an oil rig with the caption “they said I needed money, I have other assets.”

That isn’t a deepfake or a fake advertisement from the opposition. She knowingly distributed the obscene advertising and seemed to be proud of it.

They said I needed money. 🤣 I have other assets. pic.twitter.com/OI9z9EDRRG

Sarah, maybe there’s a better way than acting like a stripper. Unless you’re looking for a job as a madame in a shady establishment, that’s an excellent place to start.

However, the criticism was not limited to Twitter. It included the editorial board of the San Antonio Chronicle, a powerful newspaper that had endorsed her prior to the publication of the ad.

After seeing the ad and determining that it was true, the board retracted its recommendation and initiated a campaign of vehement criticism.

The tape also enraged the editorial board of the San Antonio Express-News, which withdrew its support for Stogner in a stinging email just days after officially endorsing him.

The editorial board said, later adding that the video’s following the comment made it that much worse.

“We were disappointed to see a disgraceful TikTok video posted Sunday from Sarah Stogner, whom we recently recommended in the Republican primary for railroad commissioner. We rescind our recommendation. We expect candidates for public office to model civil discourse and decorum worthy of the public’s trust. This was neither. Instead, it’s an indictment of these times that a candidate, even a marginal one, would appeal to potential voters in such way via social media, this was an embarrassing failure.”