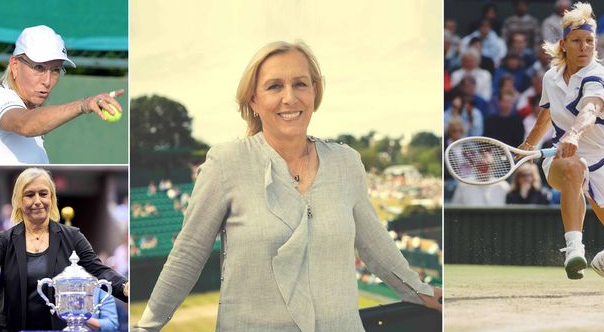 Martina Navratilova announced on Monday that she has been diagnosed with two types of cancer.

Navratilova, 66, has throat and breast cancer, both of which have been detected in their early stages.

“This double whammy is serious but still fixable, and I’m hoping for a favorable outcome,” Navratilova said in a statement. “It’s going to stink for a while, but I’ll fight with all have I got.”

Navratilova was in for a throat exam when both forms of the disease were discovered. She will begin treatment later this month.

Navratilova, who was born in the Czech Republic, was a strong player in the 1970s and 1980s, winning 18 Grand Slam singles titles. She had a long rivalry with American Chris Evert, who recently died of ovarian cancer.

“I really didn’t talk much about breast cancer before I had it,” Navratilova previously told People.

“Now, I’m approached by women and we share our stories. It’s encouraging to see that there’s life after cancer.”

She won 59 Grand Slams in total, 31 in women’s doubles and 10 in mixed doubles. The most recent was a mixed doubles title with Bob Bryan at the 2006 U.S. Open, just a month before her 50th birthday.

Navratilova retired in 1994, after winning a record 167 singles titles and spending 331 weeks at the top of the WTA rankings. In 2000, she returned to the tour to participate in doubles and rarely in singles.

In 2000, Navratilova was inducted into the International Tennis Hall of Fame. In recent years, she has worked as a TV analyst.

Navratilova will not be a regular part of Tennis Channel’s coverage of the Australian Open later this month, according to a statement made Monday, but “hopes to be able to join in from time to time” via video conference.