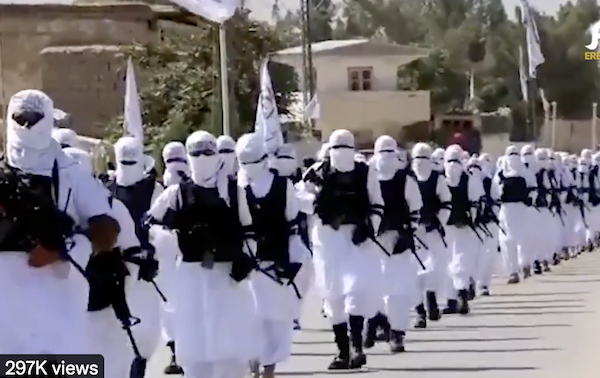 After President Joe Biden’s failure to pull out of Afghanistan successfully, the Taliban extremist group has displayed equipment that was purchased by American taxpayers.

Afghanistan is in total chaos because President Biden miscalculated the Taliban’s strength.

The Taliban now control almost all of the country and are holding military parades equipped with United States equipment.

Check Out These Videos:

The situation in Afghanistan is worsening. According to a bombshell report from the National Pulse, the Biden administration ended a Trump “crisis response” plan intended to avoid disastrous withdraw situations like the one going on in Afghanistan right now.

“Joe Biden’s State Department moved to cancel a critical State Department program aimed at providing swift and safe evacuations of Americans out of crisis zones just months prior to the fall of Kabul, The National Pulse can exclusively reveal,” the outlet reported.

Check out their reports below.

The “Contingency and Crisis Response Bureau” – which was designed to handle medical, diplomatic, and logistical support concerning Americans overseas was paused by Anthony Blinken’s State Department earlier this year. Notification was officially signed just months before the Taliban’s takeover of Afghanistan.

“SENSITIVE BUT UNCLASSIFIED,” an official State Department document from the Biden State Department begins, before outlining the following move the quash the Trump-era funding for the new bureau.

The document is from the desk of Deputy Secretary of State Brian P. McKeon, confirmed in March by the United States Senate.

The document is dated June 11, 2021, though The National Pulse understands the decision to pause the program may have come as early as February, both undermining the original Trump-era date for the withdrawal of troops from Afghanistan, and certainly giving the Taliban time to threaten American assets and lives on the run up to Joe Biden’s September 11th date of withdrawal.

The letter states that you will direct the termination of CCR’s establishment and termination, in accordance with applicable legal requirements, stakeholder engagement, as well as any changes to the Foreign Affairs Manual or other requirements.

During a conversation with the National Pulse former President Donald Trump unleashed his anger on the Biden government.

“My Administration prioritized keeping Americans safe, Biden leaves them behind. Canceling this successful Trump Administration program before the withdrawal that would have helped tens of thousands Americans reach home is beyond disgraceful,” he said. “Our withdrawal was conditions-based and perfect, it would have been flawlessly executed and nobody would have even known we left. The Biden execution and withdrawal is perhaps the greatest embarrassment to our Country in History, both as a military and humanitarian operation.”