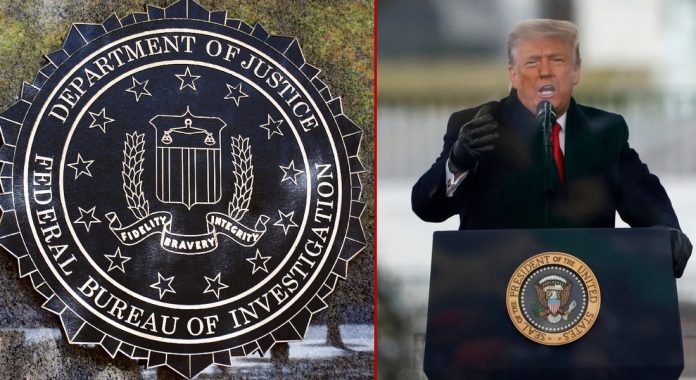 The Federal Bureau of Investigation didn’t set out to prove Donald Trump was not involved in the January 6 events that have been characterized as an “insurrection” and a “coup.” But a exclusive report from Reuters obliterates the essential claims that Trump directed extremists to attack the Capitol building and urged protesters to thwart a peaceful transfer of power.

“The FBI has found scant evidence that the Jan. 6 attack on the U.S. Capitol was the result of an organized plot to overturn the presidential election result, according to four current and former law enforcement officials,” Reuters reported.

“Though federal officials have arrested more than 570 alleged participants, the FBI at this point believes the violence was not centrally coordinated by far-right groups or prominent supporters of then-President Donald Trump, according to the sources, who have been either directly involved in or briefed regularly on the wide-ranging investigations,” the report stated.

“Ninety to ninety-five percent of these are one-off cases,” said a former senior law enforcement official with knowledge of the investigation. “Then you have five percent, maybe, of these militia groups that were more closely organized. But there was no grand scheme with Roger Stone and Alex Jones and all of these people to storm the Capitol and take hostages.”

The FBI provided evidence that many of the Capitol riots victims were Trump-supporting MAGA tourist supporters who were swept up in an outside terror group’s planned siege. Donald Trump did not order the siege.

The Nation will indeed remember January 6, 2021—and President Trump’s singular responsibility for that tragedy. It is impossible to imagine the events of January 6 occurring without President Trump creating a powder keg, striking a match, and then seeking personal advantage from the ensuing havoc.

However, President Trump could not have “incited” the Capitol attack that was planned before his speech was given. According to the New York Times, the “first barriers” were broken at 12:53 p.m. on the Capitol’s Northwest side. The NY Times claims that Trump’s “call for action” occurred at 1:12 p.m. This is almost twenty minutes after the purported “first breach” of the barricades. The speech was delivered a mile and half away.

Trump’s speech was a standard political speech. He even asked the audience to “peacefully, patriotically make your voices heard” during his speech. Trump also intentionally said “fight” in a common political context.

The Commander-in Chief and head of powerful intelligence agencies and law enforcement agencies didn’t select a motley group of extremist elements to stage a “coup” in order to discredit the objections to the Electoral College. It was not found that the Capitol building extremists were armed with firearms. Although this was an absurd argument, major news outlets continued to promote it.

Reuters had published a tendentious article on January 6 claiming that Donald Trump tried to ‘thwart a peaceful transfer’ of power.

“Trump has sought for weeks to thwart a peaceful transfer of power, aided by groups such as ‘Stop the Steal,’ which promoted stopthesteal.us the day’s protest and peddled false claims about voter fraud on Facebook and other social media,” Reuters continued.

“In a statement posted on Twitter by White House spokesman Dan Scavino on Thursday, Trump said there would be an orderly transition of power ‘though I totally disagree with the outcome of the election’,” the report stated.

“But Wednesday’s events were the culmination of his efforts to thwart a peaceful transfer,” Reuters claimed. “About 50 minutes into the speech, some of his supporters, waving Trump flags, began heading toward Capitol Hill, where unprecedented mayhem ensued.”

This deceptive narrative is evident on many levels, even if you consider that Democrats have been making arguments for years that elections were’stolen or had otherwise contested the results. An article in USA Today is indicative of the kinds of misleading narratives the media spread about January 6 and Donald Trump’s purported role in it.

“As the cases against nearly 200 of the Capitol rioters begin to wind through federal court, many of the defendants blame the commander in chief they followed for the violence that left five dead during the insurrection Jan. 6,” USA Today earlier reported.

“In court documents, media interviews and through official attorney statements, staunch supporters of former President Donald Trump who carried out the attempted coup argue they were merely doing what they thought the nation’s leader had asked, some citing a cult-like loyalty.”

However, none of the January 6 defendants were charged with “insurrection” or with trying to overturn an electoral process. In fact, many of those who were charged with even violent crimes are getting plea deals, apparently to prevent the release of exculpatory evidence in discovery, such as nearly 14,000 hours of video footage of the event.

The FBI has revealed that it found nothing against the 550 defendants that suggests it was an organized “coup”. There is nothing to suggest that Donald Trump incited the riots or directed the extremists.

However, the lack of evidence did not stop a partisan impeachment trial against former president. This shows that the Democratic Party doesn’t care about dividing the country by making unfounded and extreme claims against its political enemies.