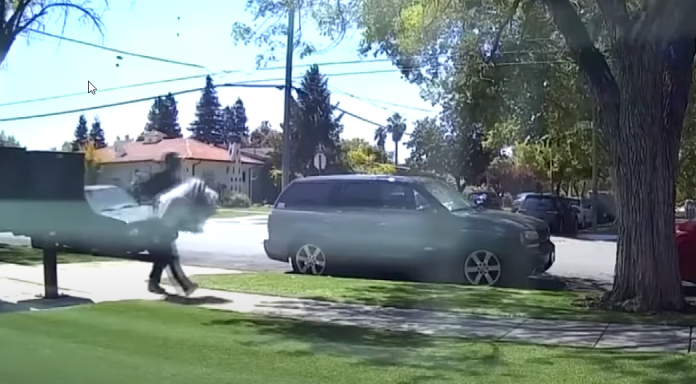 A 3-month-old infant was abducted from his family’s San Jose apartment by a stranger as his grandma was unloading groceries, according to police in California.

At about 1 p.m., the kidnapper entered the residence in the 1000 block of Elm Street. San Jose Police said the mother and child departed on Monday with Brandon Cuellar, who was clothed in a long-sleeved onesie with dinosaurs.

Surveillance footage shows the guy suspect strolling down the sidewalk with a black baby carrier with white trim and a white blanket covering it.

According to the police, the family does not recognize the suspect.

While his mother was at work, infant Brandon was being cared for by his grandmother, according to police Sgt. Christian Camarillo. The father of the boy is presently incarcerated.

The grandma had just returned from a shopping excursion with her grandson and was unloading goods from her car while the baby slept upstairs in a bedroom. The baby was just left alone for a few minutes, according to cops.

According to authorities, the grandma did not observe the man enter the flat or depart with the infant.

Agents from the FBI spent the night in the neighborhood, visiting door to door and interrogating prospective witnesses.

Brandon has not been placed on an Amber Alert since authorities do not have a vehicle description.

A man in black jeans, a dark blue shirt, grey shoes with white trim, a grey baseball cap, and a black face mask was characterized as the kidnapping suspect.

Brandon’s mother and grandma are having a difficult time not knowing where he is, according to the sergeant.