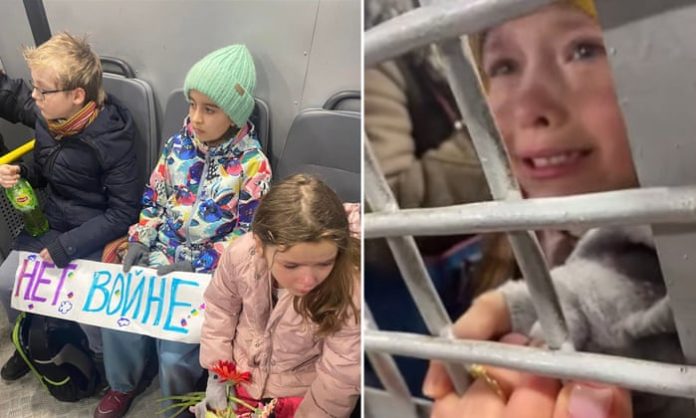 Two mothers and five children were detained by Moscow police as they attempted to leave flowers before the Ukrainian embassy.

The children were photographed clutching a placard that read “No to War” during their imprisonment.

According to anthropologist Alexandra Arkhipova, the children, aged 7 to 11, were kept in a police van alongside their moms before being transported to a police station and freed hours later.

Ekaterina Zavizion and Olga Alter were detained, according to Arkhipova.

On social media, one of the women appeared to explain to a crying girl from within a jail that the goal is for fewer people to gather and say they oppose the war.

A Russian flag was followed by a plus sign and a Ukrainian flag, forming a heart, on another placard held by one of the children.

Children under the age of 14 cannot be held for more than three hours, according to the OVD-Info website, which tracks protests and arrests across Russia.

Dmytro Kuleba, Ukraine’s foreign minister, said the children’s deaths were another example of the toll Putin’s war on Ukraine is putting on youngsters.

Yelena Osipova, a 77-year-old artist and activist, was also marched away by a gang of police in St Petersburg while protesting the war.

Thousands of people have defied police intimidation and staged protests against the invasion of Ukraine in cities across Russia. Demonstrations and marches are frowned upon by authorities, and participating in them can result in fines, arrests, and even jail.

According to OVD-Info, officials in 33 Russian towns have arrested over 320 anti-war protestors. Since Russian President Vladimir Putin authorized the invasion of Ukraine last Thursday, a total of 6,840 persons have been imprisoned.