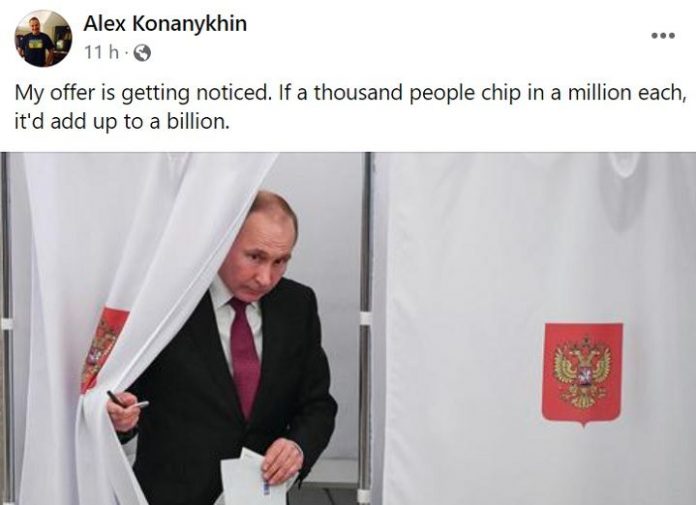 A $1 million bounty has been set on Russian President Vladimir Putin’s head by a Russian businessman and investor located in the United States.

Alex Konanykhin called on Russian military officers to arrest Putin as a war criminal in a Facebook post on Tuesday. Their remuneration? The whole total is one million dollars.

“I promise to pay $1,000,000 to the officers who, complying with their constitutional duty, arrests Putin as a war criminal under Russian and international laws,” Konanykhin stated in his post.

Putin, he added, is not the Russian president since he came to power by a special operation that involved blowing up apartment buildings in Russia, then abusing the Constitution by suppressing free elections and assassinating his opponents.

Konanykhin also alleged that Facebook took down his first post regarding the bounty because it included a graphic of a dead or alive poster.

The money will come from Konanykhin’s personal savings, a crypto investor told Insider on Wednesday.

Konanykhin told the source that he hasn’t been back to Russia since 1992 and that he was granted political asylum in the US in 1999.

Konanykhin studied at the Moscow Physics and Technical Institute before founding what was described as a student construction cooperative, according to a 1996 Washington Post article. He eventually expanded his business portfolio, dabbling in banking, real estate, and trading.

Konanykhin’s businesses were worth almost $300 million in 1992.

Putin would rather drown Russia in blood than ever relinquish power, Konanykhin told the Sun in 2021.

He argued at the time that such a regime can’t be overthrown through elections since he doesn’t have any parliamentary opposition, no media opposing him, and every kind of organized opposition has been wiped out. It would have to be eliminated by force, because neither domestically nor internationally exists such a force.

Only a battle inside the ruling elite, Konanykhin believes, will be able to depose Putin.