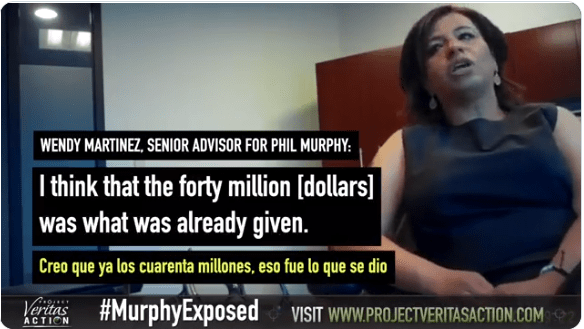 Chris Murphy, a radical far-left governor, plans to force mandatory vaccine mandates across the state if he is reelected. He’s also one of America’s worst human beings.

Here is yet another reason why.

Wendy Martinez is Murphy’s senior advisor. Here is her conversation with Murphy, captured on undercover video.

WATCH IT ALL HERE:

BREAKING: NJ @GovMurphy OMITTING info on allocation of Taxpayer Funds to Illegal Immigrants until after election

“It’s 40 million dollars [being allocated to illegals]…and to designate that at this point would be political suicide.”#MurphyExposed pic.twitter.com/b4AzQWx4NX

Heres Some Of The Transcript In Case Its Hard To Hear:

Martinez: “It [money] was for the excluded workers – for the undocumented workers. I think it’s $40 million, something like that, and to designate that much at this point would be political suicide.”

V Journalist: “If he allocates that much to the illegals? So, he isn’t going to say anything right now?”

Martinez: “There’s been some money given already. It hasn’t been said. What’s happening is they want more. I think that the forty million was what was already given.”

PV: “But if he talks about it, then it’s gonna be suicide for him?”

Martinez: “If he does it right now, yes.”

Martinez: “Yeah, we just need to get elected first.”