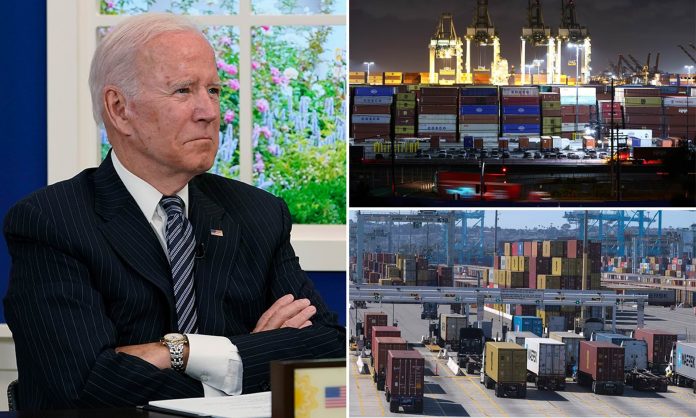 CNBC reported Monday that business groups have asked the Biden administration for a delay in its COVID-19 mandate for private companies.

The White House Office of Management and Budget (OMB), met last week with labor unions and industry lobbyists to review the final mandate. This mandate will require companies with more than 100 employees to have their workers tested for the virus weekly.

Additional meetings with other groups were scheduled for Monday and Tuesday.

CNBC reports that the new rule will cover approximately two-thirds (or more) of the private sector workforce.

Occupation Safety and Health Administration presented its final rule on Oct. 12 to OMB. The mandate will take effect shortly after the agency has completed its review.

“It has been a hectic holiday season already, as you know, with supply chain struggles,” Evan Armstrong, a lobbyist at the Retail Industry Leaders Association, told CNBC. “This is a difficult policy to implement. It would be even more difficult during the holiday season.”

In meetings last week, the National Retail Federation and the Retail Leaders group requested that the White House give businesses 90 days to comply delaying the effective date to late January at the earliest.

CNBC spoke with Jordan Barab during Obama’s administration as deputy assistant secretary to OSHA. He said that the administration would likely give businesses approximately 10 weeks, just like they did for federal contractors until all employees are fully vaccinated. He said that weekly testing could be completed sooner than the compliance date.

Robyn Boerstling is a top lobbyist at the National Association of Manufacturers. She called the federal requirements “redundant” and “costly” for companies that support vaccination within their workforce.

Manufacturers group asks the administration to exempt businesses if they have implemented company-wide mandates, or reached a certain level in vaccination among their employees.

“A realistic implementation period can allow for workforce planning that is necessary given the acute skilled worker shortage and ongoing supply chain challenges by supporting the need to keep manufacturing open and operational,” Boerstling wrote in the letter to the administration last Monday.

After a record 4.3 million workers quit in August, which was the largest turnover in 20-years, industry concerns over the effect of Biden’s vaccine mandate on their employees are growing.

“We’re already having supply chain issues; we’re already having workforce shortage issues,” Ed Egee, a top lobbyist at the National Retail Federation, told CNBC. “This mandate cannot be implemented in 2021 without having serious repercussions on the American economy.”