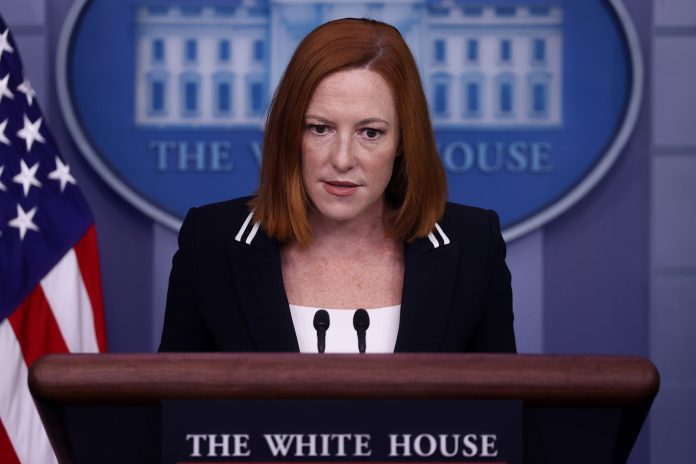 White House Press Secretary Jen Psaki lashed into a male reporter on Thursday after he questioned how President Biden could support abortion rights despite his Catholic faith — in light of the president’s strong critique of the Supreme Court’s decision to uphold Texas’ controversial abortion bill.

“Following up on the Texas law, why does the president support abortion when his own Catholic faith teaches abortion is morally wrong?” asked Owen Jensen, a DC reporter for Eternal Word Television Network, known for its Catholic-focused programming.

Jensen pressed further, asking, “Who does he believe then should look out for the unborn child?”

This law, which is the most stringent in the country since Row V. Wade, has been widely criticized for its ban on abortions at six weeks. It also allows private citizens to bring legal action against anyone who assists in ending a pregnancy, even those who drive a woman there.

These lawsuits can result in citizens being entitled to at most $10,000.

Only one exception is allowed by law: a “serious emergency”, in which the doctor must show that the woman is at risk of death or serious bodily impairment if she is not able to have an abortion.

Biden slammed the Supreme Court’s ruling on Thursday, calling it an “unprecedented assault on a woman’s constitutional rights under Roe v. Wade.”

“By allowing a law to go into effect that empowers private citizens in Texas to sue health care providers, family members supporting a woman exercising her right to choose after six weeks, or even a friend who drives her to a hospital or clinic, it unleashes unconstitutional chaos and empowers self-anointed enforcers to have devastating impacts,” he said in a statement.

“Rather than use its supreme authority to ensure justice could be fairly sought, the highest Court of our land will allow millions of women in Texas in need of critical reproductive care to suffer while courts sift through procedural complexities.”

In response to the ruling, the president has directed the Gender Policy Council and the Office of the White House Counsel to start on a “whole-of-government” response to see what steps the Federal government can take to protect the abortion rights of women in Texas.

Psaki was encouraged to speak during the briefing about the president’s plan for action regarding the Supreme Court’s future. Biden signed in April an executive order establishing a commission to review the Supreme Court, looking into several issues, including expansion and term limits.

As the commission’s findings are due in October, questions have been raised on what actions Biden plans to take towards the court.

Psaki left the options open, saying the president is “waiting for the conclusion of this report, looks forward to reviewing it and seeing where [the commission come’s] out.”

“I can’t predict for you, I don’t know where he’s going to land,” she added. “I’m going to leave the space for the president to determine that.”