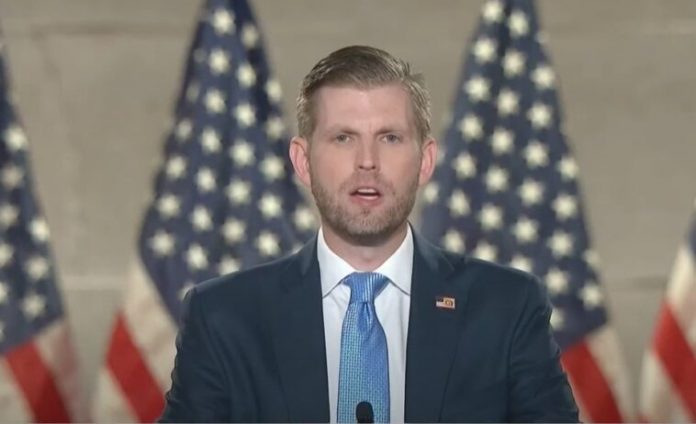 Eric Trump, the son of the President, stated Tuesday that American taxpayers should be entitled to a refund following the chaos and deadly evacuation from Afghanistan last weekend.

“Think about it: 600,000 arms, 76,000 the vehicles [that] we gave a terrorist organization that three weeks ago was riding around on mopeds,” Trump said Tuesday on Newsmax TV.

“I feel like we’re getting ripped off every single day,” Trump stated.

He also went on to note that the weapons “do not have expiration dates on them,” suggesting further they will be used “for the next 20 and 30 and 40 and 50 and 60 years.”

“I mean, some of the AK-47s that they have on the battlefield right now, they were produced in the 1960s and 1970s,” former President Donald Trump’s son added.

“It is going to be untold lives that these weapons take because of our foolishness and our carelessness,” he stated.

“The blood of Americans and the blood of people all around the world will lie with [President] Joe Biden,” Trump added.

Then he noticed that Biden seemed to be constantly checking his watch during a solemn ceremony at Dover Air Force Base, where 13 U.S. military personnel were killed in a suicide attack in Kabul on Thursday. He was then offloaded from a C-17 plane.

“I remember my father went out there and he would see troops coming off the back of these planes, and I can tell you the impact that that has on a person’s life, and this guy is looking at his watch,” he stated.

“We want a refund as a nation,” Trump stated. “This guy is a disaster.

He claimed that his father did not initiate new wars, but ended them. In fact, he sent a huge bomb to a cave in Afghanistan in 2017 with the intent of killing many Taliban militants.

These acts earned the respect of the country’s enemies and earned him his father’s love.

“North Korea sees that, and Russia sees and China sees it,” he stated. “People realize that Donald Trump wasn’t playing around.”

Trump’s middle son said that the region is much more extreme than it was prior to the 9/11 attacks almost 20 years ago, when the Taliban was in control. He also noted that Pakistan next door is just as extremist and nuclear-armed.

“Pakistan is a nuclear power. They believe in Sharia law as well,” he added.

“And that’s not a good combination, especially when we have no eyes and ears on the ground,” Trump stated.

“And we as a country better be damn careful that it doesn’t attack our shores in a much larger way than ever before.”

Donald Trump said in an interview with One America News Network that was broadcast on Monday he believes another 9/11-style attack will happen in the U.S. because of the way the U.S. withdrew and because the southwestern border remains poorly defended.