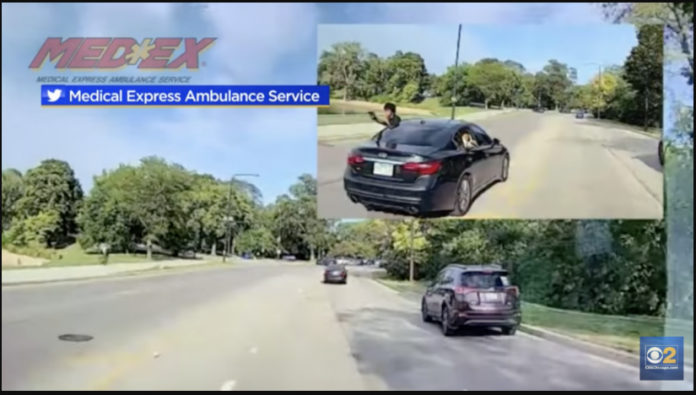 In Chicago’s Jackson Park neighborhood, where violence is a problem for both the city and the country, paramedics were forced to take shelter after a shooting occurred close to their ambulance.

On September 21, a hail of gunshots was fired by suspects in a vehicle as it sped past two Med Express Ambulance employees between 67th and South Shore.

The Medical Express Ambulance Service published dash cam footage from inside the car in a social media post on Wednesday, claiming the staff members were on their way to a dispatch when they heard the shots.

A dark-colored vehicle with what seemed to be two people hanging out the windows passed them in the video.

The ambulance did a U-turn after the driver realized that someone on a bike had been shot. A person was then visible on the ground in the right section of the footage a short while later.

Although crew safety is their top priority, the team pushed it aside to help someone else, according to Chief Operating Officer Michael Pieroni.

In addition, 36 individuals were shot over the weekend in Mayor Lori Lightfoot’s (D) Chicago, and at least five of them passed away.

Additionally, the publication said on October 5 that the rise in violent crime in President Joe Biden’s (D) America is becoming a decisive factor for voters in the 2018 midterm elections.