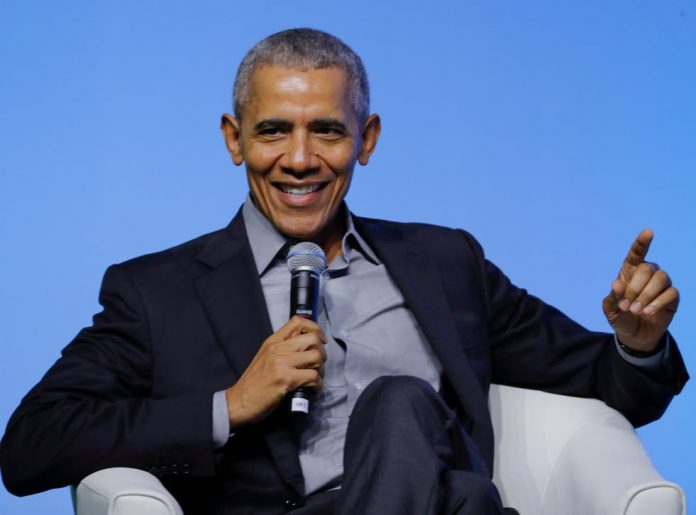 Barack Obama, the former President of the United States, was captured on video at his 60th birthday celebration in Martha’s Vineyard. He was dancing without masks inside a tent full of celebrities.

In a video posted to Instagram by singer-songwriter, Erykah Badu, Obama could be seen holding a microphone and dancing in the middle of the raised dance floor — to the cheers of gathered guests, the Daily Mail reported.

Badu was performing with her band members and convinced Obama to take the stage.

While Obama was looking at her back, she snapped a selfie that captured Obama in full-frame. She then uploaded it directly to Instagram, despite the fact that photos were banned at the event. The Daily Mail reported that crowds could be seen in the background. This was also contrary to Obama’s claim that the event would be cut due to the spread of COVID-19.

The singer H.E.R. (real name Gabriella Sarmiento Wilson) also posted a photo on Instagram and Twitter showing her with Jeanine McClean, her manager, and the Obamas, according to the news outlet. It was deleted hours later.

The performers were among the celebrities, politicians and a couple hundred others who packed in the event at Obama’s $12 million mansion — billed as a “scaled-back” bash amid rising concerns about the fast-spreading delta variant of COVID-19, the New York Post reported.

‘It’s hypocrisy at its finest and shows they don’t believe what they are saying,’ Republican Party consultant Ryan James Girdusky told the news outlet.

“The liberal elites are laughing at us, attempting to sell this as a ‘scaled-back party,’ ‘ GOP chairwoman and New York GOP Rep. Elise Stefanik added.

Other details of the exclusive party were revealed after TJ Chapman and the DJ/musician he manages, Trap Beckham, posted pictures from the event, the New York Post also reported.

Amazing party @barackobama I couldn’t figure out what the 44×60 meant. It’s the 44th president 60th Bday,” Chapman wrote on Instagram.

Gold napkins, masks and backstage passes were emblazoned with 44X60 and bathroom amenities included antiperspirant wipes, a lint roller and Advil, according to the pictures.

Beckham performed a rendition of his hit “Birthday B—h” for Obama. John Legend and Alicia Keys also sang the song. Later, the Daily Mail reported that Beckham posted about the party.

“Had to delete everything due to the rules,” Beckham explained, the Daily Mail reported. “It was epic for sure. If any videos surface it’s going viral. He danced the whole time. Nobody ever seen Obama like this before.”