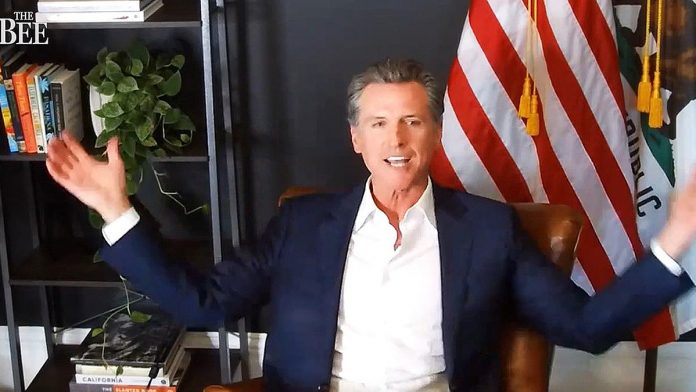 Gavin Newsom, Democratic Governor of California is losing his mind. California’s governor faces recall because Californians are unhappy with Newsom’s handling of the coronavirus pandemic, and his inability to manage California.

Newsom may also feel the heat from Andrew Cuomo’s ouster as New York Governor this week. This was allegedly due to allegations of “sexual harassment”. Cuomo also failed to manage the COVID-19 pandemic.

Newsom was unable to control himself during an interview with Sacramento Bee’s editorial board. Reporters began questioning him about his poor performance as governor, including California’s high crime rate, homelessness and high taxes.

“The California dream is more like a mirage,” said one reporter to Newsom.

Newsom was under pressure from reporters and he became unhinged and ranty. He slammed his fingers on his desk thinking that it would convey his point. Newsom was slapped on his desk 60 times, according to the Gateway Pundit.

“It’d be damn nice if our homegrown teams started focusing on what’s right!” Newsom said. “Everybody outside this state is bitching about this state because of our success!”

WATCH IS ALL UNFOLD HERE:

Newsom is also feeling the heat from Conservative radio show host Larry Elder, who is challenging the California governor in the upcoming recall.

Elder claims that he raised nearly $4.5 million within the first 19 days after announcing his bid for California Governor Gavin Newsom’s replacement in the special recall election set for September 14th.

According to Elder’s campaign, the total includes contributions received from July 12, 2021 (the day Elder announced his candidacy) to July 31, 2021 at the close of the most recent reporting period. The team also explained that 46,000 donors had supported him financially, with the average donation being $84.00.

According to Politico, “In mere weeks, his total eclipsed what fellow Republicans had raised in months, and daily filings show Elder has pulled in another $440,000 in the first few days of August.”

“The numbers announced by my campaign today solidify my candidacy to defeat Gavin Newsom in the upcoming recall election,” Elder said in a statement on Thursday. “Californians have shown up and believe in our mission to recall Newsom and elect me in his place. Newsom can raise an unlimited amount of funds for this election; therefore, every single donation to my campaign counts, whether small or large.”