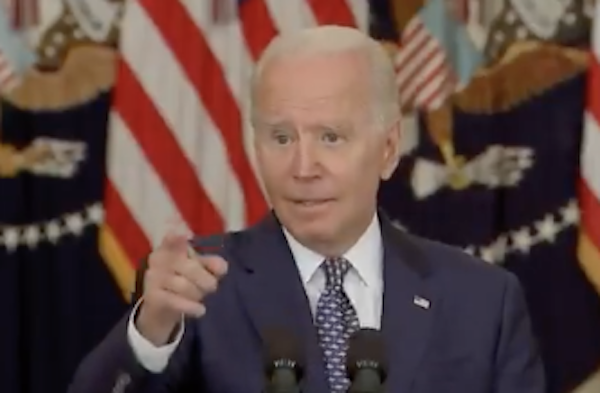 During a press conference on Tuesday, President Joe Biden praises sexual predator Andrew Cuomo after he got busted in a sexual harassment scandal. The president praised Cuomo for doing a “hell of a job,” before barking at a reporter for following up with the scandal.

“Ironically, one of the Democrats, through the years that you spoke with about infrastructure the most was Andrew Cuomo, who is resigning, who announced he’s resigning today,” said a reporter said to Biden on Tuesday. “You had traveled New York with him when you were vice president to the launch of the reconstruction [inaudible]. He was someone who supported your campaign early on. I know you called him to resign. I know you condemned the alleged behavior.”

“But you’re someone who spends a lot of time with mayors and governors,” the reporter added. “How would you assess his 10 and a half years as governor of the state?”

“In terms of his personal behavior, or what he’s done as a governor?” Biden questioned.

“What he’s done as a governor,” the reporter replied.

“Well, he’s done a hell of a job … a hell of a job,” Biden said. “And I mean, both on everything from access to voting infrastructure to a whole range of things. That’s why it’s so sad.”

Joe Biden praises Andrew Cuomo despite his nursing home scandal: “he's done a hell of a job…that’s why it’s so sad” pic.twitter.com/f8MQob1rH0

Biden could not handle the heat, so he asked reporters to refrain from asking any further questions about Cuomo.

A few moments later, another reporter asked him: “Can you really claim he’s done ‘a hell of job’ if he was accused of sexually harassing female employees on the job?”

“Look, you asked two different questions,” Biden shot back. “I asked the substantive ‘should he remain as governor’ is one question and women should be believed when they make accusations that are able to on the face of them make sense and investigate, they’re investigated, and the judgement was made that what they said was correct. That’s one thing. The question is, did he do a good job on infrastructure. That was the question. He did.”

“The question was, how did he do as a governor,” the reporter responded.

“No, the question was, correct me if I’m wrong,” Biden said.

The first reporter who asked about the Cuomo scandal confirmed that he was asking about how Cuomo “generally” did as a governor.

“Outside his personal behavior—” the first reporter added.

“Outside of his personal behavior?” Biden responded. “Okay.”

“But can you separate the two?” the second reporter questioned.

“No, I’m not, I was asked a specific question and I’m trying to answer specifically,” Biden said.