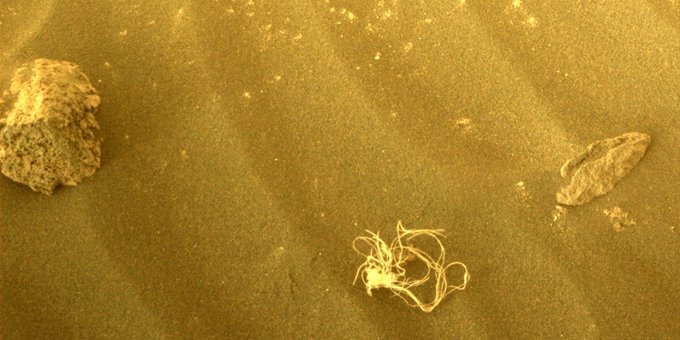 As far as the Jet Propulsion Laboratory (JPL) of NASA is aware, Mars does not yet have any spinning mills.

So, some social media users were curious by the picture of what appeared to be a little Martian tumbleweed.

The images were taken by the Mars Perseverance rover’s Front Right and Front Left Hazard Avoidance Camera A.

Last week, one was chosen as “Image of the Week” by the general population.

The stringy clump is believed to be mission-related debris, and this is the widely held hypothesis. A NASA representative verified this in an email to Gizmodo.

Debris had already been recorded on camera by “Percy”

A fragment of thermal blanket that could have originated from the rover’s descent stage was discovered, according to a tweet from the Perseverance team in June.

“That shiny bit of foil is part of a thermal blanket — a material used to control temperatures,” JPL wrote. “It’s a surprise finding this here: My descent stage crashed about 2 km away. Did this piece land here after that, or was it blown here by the wind?”

Also on July 12, the team reported that the rover has taken its ninth sample of rock from a core.