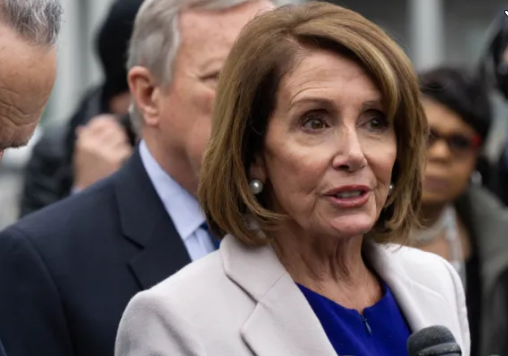 Former House Majority Leader Nancy Pelosi called priests to purge the bad spirits from her luxe in San Francisco property after a man is said to have attacked her husband there with a hammer.

“I think that weighed really heavy on her soul. I think she felt really guilty. I think that really broke her. Over Thanksgiving, she had priests coming, trying to have an exorcism of the house and having prayer services,” said Pelosi’s daughter, Alexandra, on Saturday.

The pastor of Pelosi’s neighborhood church, St. Vincent de Paul Church, Fr. Arturo Albano, stated that his personnel was not participating in such a ceremony.

Albano said, “As far as I know, no exorcism or priest services were performed at her home.”

Pelosi may have turned to a higher authority within her local church, though.

The Democrat was prohibited from receiving Holy Communion by San Francisco Archbishop Salvatore Cordileone in May “until such time as you publically repudiate your advocacy for the legitimacy of abortion,” the archdiocese wrote at the time.

Critics practically scaled the barricades in response to the bizarre news.

“Will she also be coordinating one for the speaker’s office?” Rep. Matt Gaetz questioned (R-Fla.).

“The woman is positively conflicted. She wears her Catholicism on her sleeve while basically sticking her middle finger at the Catholic Church every opportunity she has.If it’s genuine, she needs psychiatric help. And if not, it’s another example of Nancy Pelosi exploiting the Catholic Church for her own personal gain.”

However, exorcism may be necessary to confront demonic infestation and the presence of evil that may stay in a location where violent crime has happened, according to Fr. Vincent Lampert, exorcist for the Roman Catholic Archdiocese of Indianapolis.

“It would be the recitation of a particular prayer, inviting the presence of God back into the house, casting out any presence of evil that may be there. Then the house would be blessed with holy water, reminding us of our new life in Christ, and the fact that we need not fear any evil, because recognizing that Christ is dwelling with us. I would say I get thousands of those requests every year.”

DePape, 42, is accused of striking Paul Pelosi, 82, with a hammer, breaking his head and gravely hurting his hands and right arm, necessitating surgery, according to authorities.

Last week in SoHo The Pelosis were spotted chowing down at Balthazar.