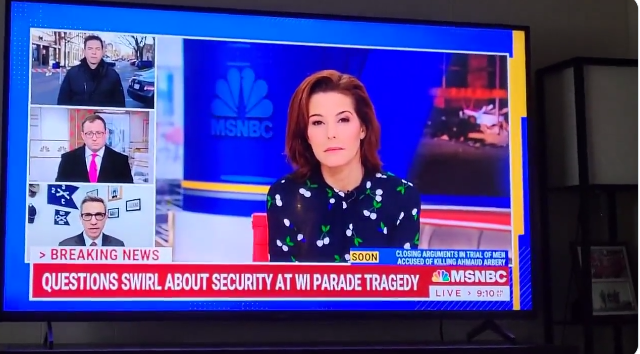 This weekend, a man drove his car into a Waukesha Christmas parade, injuring many more. Eyewitnesses say the driver deliberately sped up and drove into revelers.

NBC News suggests that we don’t call it an attack. Let’s instead call it an “accident”.

A Tuesday video describing the arrest of Darrell E. Brooks Jr. of the black suspect was uploaded by NBC. It included a caption that read: “Video captured by a Ring camera appears to show [Brooks] in front of a home before being arrested in connection to the Waukesha parade accident.”

Clint Watts, a national security analyst at MSNBC, also referred to this week’s Waukesha slayings in MSNBC as an “accident”, before correcting himself by using the word “attack”.

“One thing that you worry about,” he said, “is the idea of contagion. Whether it has anything to do with this accident last night and the killing of these people, others might be thinking of an attack like this somewhere in the world.”

Ah, yes. Everyone is wondering if the security at the Wisconsin Christmas parade was too loose. It is not enough to figure out the motives of the suspect. He was released on a measly $1,000 bail, despite apparently running over a woman in his car. What were the circumstances surrounding the multiple deaths at the parade?

No, our questions about the parade’s security procedures are absolutely swirling.

Rachel Maddow, MSNBC’s host, declined to mention the name Darrell E. Brooks Jr. this week during a segment about the Waukesha attack. He was instead referred to as “the suspect”, even though his name was already known to the public.

NBC employees are incapable of finding a compromise.

They either ignore or downplay breaking news stories or exaggerate them using incredibly misleading and deceitful hyperbole. It is usually one or another, and rarely both.

We saw this in the case against Kyle Rittenhouse’s murder trial. NBC staffers immediately portrayed the 18-year-old white Illinoisan as a terrorist and a white supremacist.

Although there is no evidence to support the claims, the NBC team has not stopped making them.

NBC did not change its mind after the jury had announced its verdict. They argued that Rittenhouse’s acquittal was further evidence that the United States is a white-supremacist country and that the justice system is specifically designed to promote and protect racism. Even after Rittenhouse was found not guilty, the network’s staffers, guests, and guests continue to promote their theories about what happened in Kenosha.

MSNBC aired this week a segment where guest David Henderson claimed that the Kenosha shootings were a victory in favor of “vigilantes everywhere.” On separate MSNBC segments, other guests also argued that the Rittenhouse trial was a significant victory for white vigilantism. One guest said that the verdict demonstrates the prejudice of the U.S. justice systems towards white defendants. By the way, the weekend segment began with a quote by Charles Blow, New York Times columnist, who calls Rittenhouse a “murderer.”

The network that was not afraid to call Rittenhouse a terrorist or a murderer after the fatal vehicular attack in Waukesha this weekend is now reluctant to speculate on motives. NBC refuses to even refer to the Waukesha attack in this way.

Indeed, for the peacock network, the Waukesha attack, which has already claimed the lives of six people, is apparently just an “accident” for which a certain unnamed “suspect” may or may not be responsible.