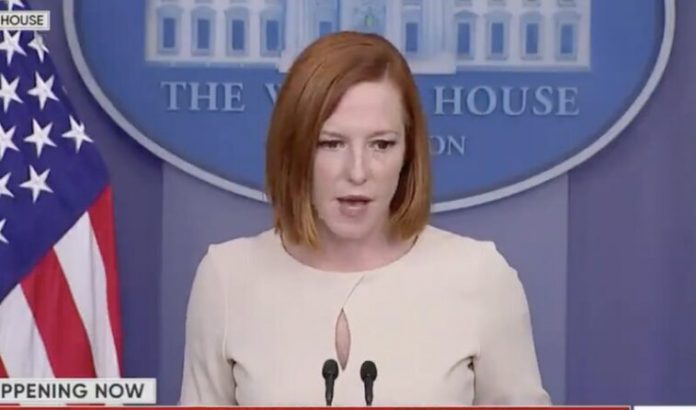 The White House refuses to apologize for President Biden’s portrayal of Kyle Rittenhouse, a cleared teen, as a dangerous white supremacist.

Jen Psaki, the press secretary, was asked Tuesday by Rittenhouse if “the President would ever apologize” for Rittenhouse’s comments. The comments were made by Rittenhouse this week which the teen called “actual malice” as well as “defaming my character.”

There’s no other way to put it: the President of the United States refused to disavow white supremacists on the debate stage last night. pic.twitter.com/Q3VZTW1vUV

Psaki retorted, saying that it was about a campaign clip released last year which used President Trump’s words during a debate in which he refused to condemn white supremacists or militia groups.

“And President Trump … didn’t just refuse to condemn militia groups on the debate stage, he actively encouraged them throughout his presidency,” she said.

“So what we’ve seen are the tragic consequences of that — when people think it’s OK to take the law into their own hands instead of allowing law enforcement to do its job,” she said.

“And the president believes in condemning hatred, division and violence. That’s exactly what was done in that video,” she said of the clip viewed more than 3.7 million times on Biden’s official presidential Twitter.

Peter Doocy, a Fox News reporter, pressed the White House press officer further. He stressed that Biden’s claims about Rittenhouse being a white supremacist or part of a militia weren’t “proven” in the trial. The teenager was eventually acquitted.

Doocy pointed out to Psaki that Rittenhouse was claiming that the president had actually committed malice in defaming him.

“The president spoke to the verdict last week,” Psaki stressed, referring to a statement in which the commander-in-chief suggested he was “angry and concerned” at the jury’s verdict.

“He has obviously condemned the hatred and division and violence we’ve seen around the country by groups like the Proud Boys and groups that that individual has posed in photos with,” Psaki stated.

Psaki was referring specifically to a January photo that showed Rittenhouse with purported members from the Proud Boys at a Wisconsin bar, making the “OK” hand gesture which is often associated with white supremacist organizations.

Rittenhouse’s trial barred prosecution from introducing the photo as evidence.

In an interview with NewsNation’s Ashleigh Banfield that aired Tuesday, Rittenhouse claimed the photo was “set up by my former attorney [John Pierce] who was fired because of that, for putting me in situations like that with people I don’t agree with.” I didn’t know that the OK hand sign was a symbol for white supremacy just as I didn’t know those people in the bar were Proud Boys,” Rittenhouse added.

“I thought they were just a bunch of, like, construction dudes based on how they looked.”