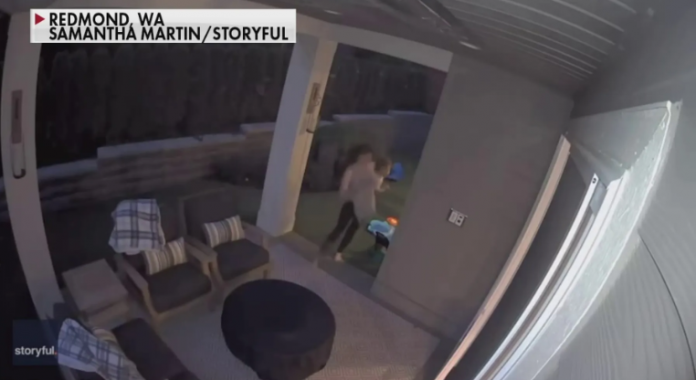 Before her toddler could administer a bear hug, a woman in Washington state dashed between a cub and her own child.

Samantha Martin of Redmond, Washington, followed her two-year-old daughter Juniper outdoors after she escaped through the patio door on Thursday.

Martin can be seen on video pleading with the toddler to return inside before turning a corner and witnessing her daughter dash toward a black bear cub.

Martin dashed back inside after chasing down her kid and scooping her up.

“She pointed out this bear and screamed at it, and then started running toward it. It started running across the fence and she chased it, so I just panicked,” Martin recalled.

A home security camera recorded a fleeting glimpse of the bear cub as it ran along the Martins’ garden fence during the hazardous encounter with nature. After damaging the family’s bird feeder, the newborn bear was munching on birdseed.

“It was just a little baby bear,” Martin told the local media, “but my biggest concern wasn’t so much the baby bear as I didn’t know where the mom was and didn’t know how she’d feel about two humans running towards her baby.”

A guy from California pleaded guilty to taking two bear pups from a cave in northern Shasta County. The cubs were later taken to a wildlife rehabilitation center, where they remained until it was judged that they could be released back into the wild.

According to a news statement from the California Department of Fish and Wildlife, Cody Dylon Setzer of Siskiyou County abducted the cubs when they were four weeks old. In 2019, the incident occurred.