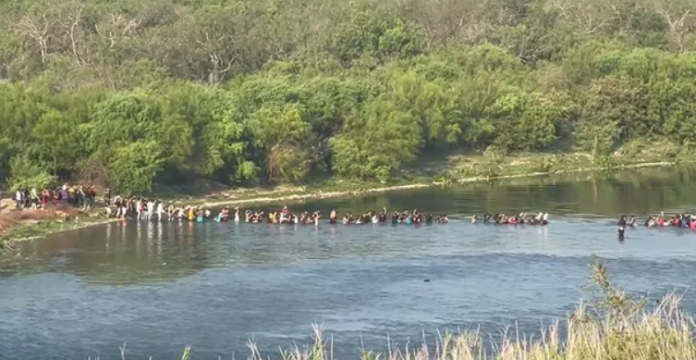 On Wednesday, a huge stream of hundreds of illegal immigrants crossed the southern border in Texas, making it one of the biggest groups to enter the country in recent months and providing a striking illustration of the unprecedented issue border officials are now dealing with.

Smugglers, often known as coyotes, were leading the large group of illegal border crossers into the river near Eagle Pass, Texas.

2,258 unlawful crossings occurred in the Del Rio Sector alone on Tuesday. There were more than 13,000 crossings in the sector during the course of a week.

The shocking figures give an insight into the issue, which continues to worsen as people come into the US from nations like Cuba and Venezuela.

BREAKING: One of the most massive single groups we have ever witnessed cross illegally at the border is crossing into Eagle Pass, TX right now. The line of people went so far into the trees it’s hard to get a count. Hundreds upon hundreds. Coyotes guiding them in water. @FoxNews pic.twitter.com/ZjZIygarAv

In only May, there were around 239,000 interactions with migrants. Customs and Border Protection has not yet made the data for June public (CBP).

The situation intensified immediately after the Biden administration took office at the beginning of last year, and since then, the numbers have been continuously high. Republicans have accused the administration of undoing Trump-era initiatives, as well as limiting internal enforcement procedures and demands for amnesty from Democrats.

The Biden administration has concentrated its reaction on addressing the issue’ underlying causes, such as poverty, violence, and climate change. The White House sees the issue as a regional one as well and has asked other nations to respond.

In a meeting with Mexican President Andres Manuel Lopez Obrador on Tuesday, Biden emphasized combined efforts with Mexico to combat human trafficking as well as an initiative that was started in April to combat the smuggling of dangerous substances like fentanyl.