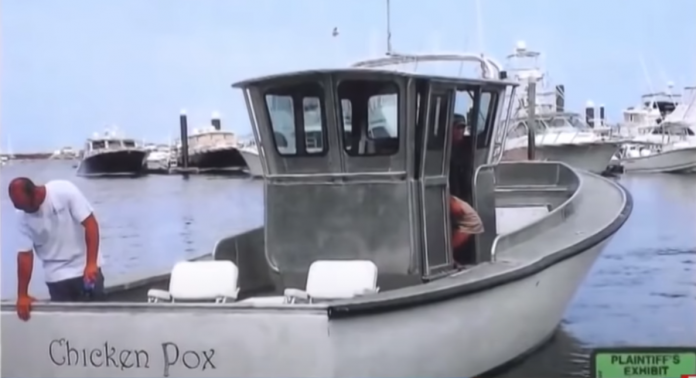 A New England man has been charged with her murder on the high seas nearly six years after he was recovered from a life raft off the coast of Rhode Island after he and his mother allegedly went out on a fishing expedition in 2016.

Nathan Carman, now 28, of Vernon, Vermont, was previously suspected of shooting and murdering his grandpa John Chakalos, 87, while he slept alone in his Windsor, Connecticut, home in December 2013.

Carman killed his mother, Linda Carman, 54, in September 2016 as part of an alleged conspiracy to receive millions of dollars in inheritance money from his grandfather’s estate and associated family trusts, according to a new indictment unsealed in Burlington, Vermont.

A Chinese ship picked up Carman in a life raft about 100 nautical miles south of Martha’s Vineyard, a Massachusetts island, on Sept. 25, 2016.

He said he and his mother had headed out on their fishing boat, the Chicken Pox, from a Rhode Island port approximately a week before the 31-foot vessel began accumulating water around Block Canyon, off Montauk Point, New York, in the Atlantic Ocean. His mother unexpectedly vanished while he swam for the life raft, he alleged.

Carman was returned to the United States Coast Guard facility in Boston, Massachusetts. His mother’s corpse has never been found, therefore she is believed deceased. Witnesses said that Carman conducted incorrect repairs before the cruise, removing two stabilizing trim tabs from the stern, near the vessel’s waterline, creating holes that he tried to fill with an epoxy stick, according to federal prosecutors.

In 2019, U.S. Carman’s insurance claim on the lost yacht was rejected in a $85,000 settlement by District Judge John McConnell.

Carman was detained on Tuesday at his Vernon home and is scheduled to appear in front of Chief US District Judge Geoffrey W. Crawford on Wednesday.

The eight-count indictment accuses him of murdering his mother on the high seas and committing various scams to gain family and insurance monies, including defrauding the corporation that insured his fishing boat, the United States Coast Guard. On Tuesday, the Attorney’s Office for the District of Vermont made the announcement. Despite the fact that the indictment claims he also murdered his grandpa, Carman is not charged with that crime.

Carman faces a mandatory life sentence if convicted of murder, according to prosecutors. Each of the fraud accusations carries a maximum sentence of 30 years in jail.