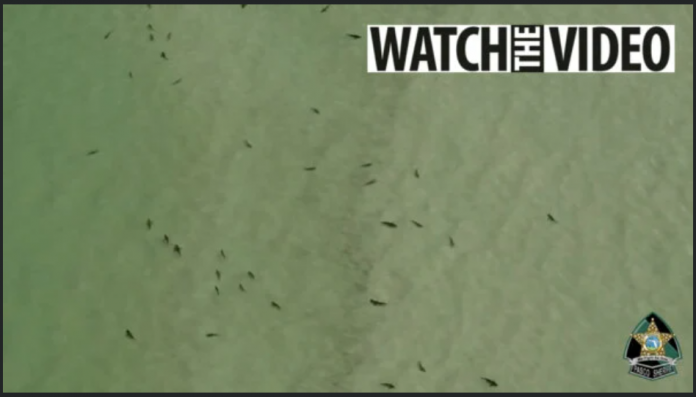 The Pasco County Sheriff’s Office uploaded video showing at least 50 sharks circling off the shore of Anclote Island taken by its aircraft crew.

“A day in the water is a fun way to beat our Florida heat,” the sheriff’s office stated on Facebook on May 4, “but it’s important to be aware of the dangers below the water as well as above.”

Just over 30 miles from Tampa, the sharks were observed.

The sharks in the footage, according to shark expert Jack Morris of local CBS station WTSP, are blacktip sharks on their yearly voyage north.

“We’ve had some unusually dry weather recently, so we’re not getting a lot of that tannic water from our rivers, which is causing the gulf and the area around the barrier islands to become very clear.”

“So year after year these animals are there, we just don’t see them as well.”

Morris cautioned that blacktip sharks have been known to bite surfers and might mistake swimmers for prey.

If you find yourself in the company of one – or several – he recommends staying away.

According to WTSP, migration usually lasts through the end of June.

Off the coast of North Carolina, the biggest male shark to be tagged in Canadian waters by scientific agency OCEARCH was discovered earlier this year.

According to Yahoo, the shark’s name is Mahone, and he is 13 feet 7 inches tall and weighs 1,701 pounds.

Mahone was tagged in the seas around Nova Scotia in October 2020 and has been migrating up and down the east coast of North America ever since.

Mahone was followed by two additional great whites in the same region. On April 6, a 12-foot, 990-pound shark was spotted off the shore, and on April 10, Tancook, a juvenile 10-foot, 715-pound shark, was spotted.

Beautiful underwater footage shows Kayleigh getting up up and personal with great white and tiger sharks as they joyously dance around her.

With her excellent film, she intends to influence people’s minds about shark attacks and explain why they are still extremely rare.