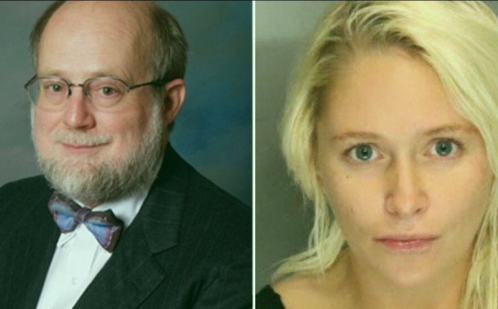 A former Playboy model was sentenced to 10 to 25 years in state prison in Nevada for her role in the killing of a California doctor who was discovered packed in the trunk of a car near Las Vegas.

Prosecutors claim Kelsey Turner and her boyfriend, Jon Kennison, murdered 71-year-old California psychiatrist Thomas Burchard and hid him in the trunk of a car abandoned in the desert near Lake Mead.

A former model, Kelsey Turner, 29, has been jailed for her role in the murder of a Californian psychiatrist, Dr Thomas Burchard, 71 and stuffing his body in the trunk of a car after he stopped paying her rent. pic.twitter.com/7P5prTwgFJ

Burchard’s friend, Judy Earp, said, “My whole world was viciously ripped from me. She printed on her home computer checks with Tom’s name and account number and her address. She also went online and made many charges paying her bills. His last words to me were, ‘she’s such a pervasive liar that I had to see for myself.’

“I never realized such evil existed in this world until this happened.

“I do not want to spend the rest of my life constantly worrying and always looking over my shoulder, if or when she is granted parole,” she said.

“Anybody with a sad story, you know. Some people took advantage of that.”

Turner took her sentencing through tears, according to CBS reporter Caroline Bleakley in Las Vegas.

Kennison was sentenced to between 18 and 45 years in prison for his role in the murder in July.

According to Law and Crime:

According to the Las Vegas Metropolitan Police Department, Burchard and Turner had a relationship with the older man whereby he paid the rent on a home she shared with her mother in Salinas, California.

But then the payments started up again.

At the time of his death, Burchard paid the rent on the Sin City house where Turner, Kennison, and Pena lived.

Judy Earp, Burchard’s girlfriend for some 17 years, said her then-partner spent upwards of $300,000 on the model over the course of several years, and described Turner “as evil as Charles Manson.”

@CourtTV @JulieCourtTV @AshleyCourtTV I tweeted court tv this yesterday. #KelseyTurner was sentenced to 10-25 years, not 25 years. Your audio cut out when she gave the sentence. Video here https://t.co/ZVXyU5Ghk6