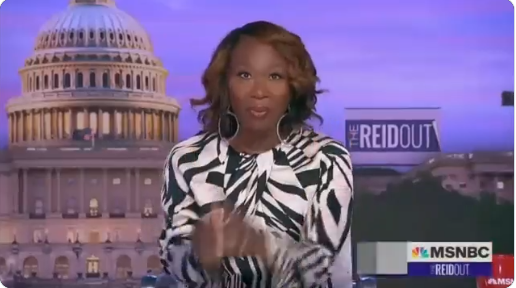 Joy Reid is one of the biased MSNBC hackers Bill Maher was probably referring to. Joy Reid never lets truth or reasonableness get the way of a great story as was seen recently in her comments and ” missing White Woman Syndrome.”

One of her new segments may have outperformed the others. She claims that the huge inflation Americans are currently experiencing is just a “GOP buzzword.”

Watch her make a fool of herself here:

Joy Reid goes FULL Stephanie Ruhle: "So, Republicans want you to believe the economy isn't doing well, that's terrible. But, in reality, unemployment is at its lowest point since the pandemic began. Prices are higher…but Americans are spending a record amount of money" pic.twitter.com/fdT8zHm9Qt

In the video, for those that can’t bear to watch, MSNBC’s Joy Reid dismisses the economic pain that Americans are facing right now amid ever-rising inflation. She calls it, as News Busters reports, “a “buzzword bandwagon” by Republicans who “want you to believe the economy isn’t doing well” when it’s “not bad” and people “are also spending a record amount of money.”

What evidence does she have to support her ridiculous assertion? There is nothing more than a tweet by Ron Klain, White House Chief Of Staff and Twitter resident. Joy Reid believes that a White House apparatchik’s tweet feed is more convincing than many reports, including the government own CPI report which details the huge inflation in America at the moment.

In the video, she also says “Republicans jump on the inflation buzzword bandwagon, ignoring all the signs of America’s economic comeback. Senator Elizabeth Warren joins me next with the truth about our economy.”

She then adds “Republicans want you to believe the economy isn’t doing well, that’s terrible. But, in reality, unemployment is at its lowest point since before the pandemic began” and, absurdly, declares that despite the fact that “[p]rices are higher,” that’s fine because “Americans are also spending a record amount of money that was pent up during the pandemic, which economics 101 will tell you drives prices up, aka inflation.”

Reid says that inflation is not a problem because we spend more on goods and are doing so. According to Reid, even if everyone had to use Zimbabwean trillion-dollar notes to buy milk, it would still be okay because that would mean we’d spend “a record amount”.

Reid does not end the story with this absurd, confusing assertion. She then blames consumers for their lack of confidence in the economy:

“[T]hat conflict between how much we want to spend and what we can get into our hands quickly is contributing to how pessimistic many Americans feel about the economy. Consumer confidence is its lowest in a decade[.]”

As I reported recently Rasmussen polls revealed that consumer confidence has fallen to a multi-decade low due to Bidenflation. Consumer confidence actually fell by 7% in the past month! Reid believes that higher prices are a positive thing.

Reid continues to make absurd comments. She blames the consumer for not feeling confident about the economy’s strength under an inflationary environment. Then she says “So-and-so, the economy isn’t bad.” It’s not that the economy is bad, but people are just mad at how things are late and expensive. People who have been waiting for months to get a car or are paying more at the grocery store will probably disagree.

Still, Reid can’t bring herself to accept reality, Instead, she presents a false reality where Republicans are only worried about inflation because they want power: “[T]he reality is as you’ve said, you know, what they say has nothing to do with reality because they want to get back in power[.]”

This isn’t about inflation. This is about price gouging for these guys. So I get it. When we see prices go up we’re all concerned, and the Republicans want to come in and just try to hammer on one theme about this economy, but we got to pay attention to the fact that folks like the oil companies say I think it’s just another opportunity to make profits and we need to call them out on that”