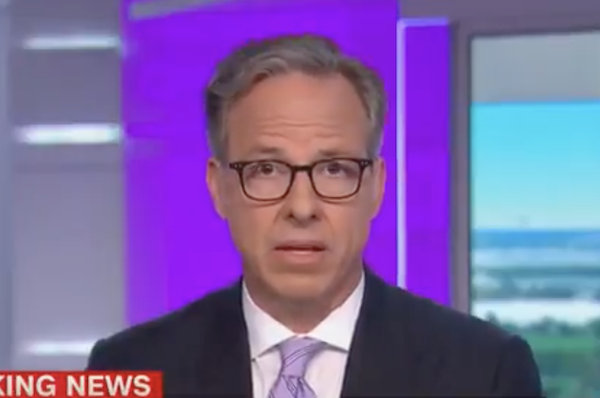 CNN anchor Jake Tapper slammed President Joe Biden for his “catastrophic exit” of Afghanistan, while he was reacting to Monday’s speech.

Biden blamed former President Donald Trump, the Afghan military, and the Afghan people during the sad speech. Biden admitted that the Taliban overthrow was more rapid than expected.

“The president said that the buck stopped with him, but in fact, this speech was full of finger-pointing and blame, especially for the Afghans,” Tapper stated. “…He did not really get into or accept any blame for the catastrophic exit that we have been watching on television in the last several days.”

During the speech, Biden responded to questions over “why we did not begin evacuating Afghan civilians sooner” by saying that “some of the Afghans did not want to leave earlier.”

Reporting from Kabul, CNN’s Clarissa Ward argued the speech will “sound like hollow words” to Afghans, as Biden didn’t take responsibility or apologize for the “catastrophic manner of this withdrawal.” David Axelrod, who served as senior adviser to former President Barack Obama, also argued on CNN that Biden should have taken responsibility during the address.

“I thought that his case for why we had to get out was strong, it was compelling, and I think he had to do that as well,” Axelrod said. “But I do think that he needed to take responsibility. … He should have said, ‘It did not go as it should have,’ and taken responsibility for that.”

CNN’s Jake Tapper: Biden “said that the buck stopped with him but, in fact, this speech was full of finger pointing and blame…for the catastrophic exit” pic.twitter.com/Z9mfULEC72

Biden’s abrupt withdrawal from Afghanistan was “catastrophic”, to put it mildly when you consider that American lives are in peril.

After the Taliban quickly took control of Afghanistan, Kabul and other areas of Afghanistan, the United States ordered an emergency evacuation. Unfortunately, for many Americans and their allies, Biden does not appear to have any plans for their safe return.

“If you’re an American stranded in Afghanistan, or know one who is, please contact my office immediately: (501) 223-9081 or evac@cotton.senate.gov The situation is dire, but we’ll do everything in our power to help keep you informed and to help get you out,” tweeted Republican Senator Tom Cotton.

Later, a correspondent for the Liberal New York Times confirmed Cotton’s tweet. He said, “Cotton spokesperson says that their office has received multiple US citizens trapped behind Taliban checkpoints from Kabul, who are unable to safely reach US perimeter and have no idea what to do.”

“Taliban started door to door search looking for govt officials, former police & security forces members & those who worked for foreign countries NGOs or infrastructures in Afghanistan. At least 3 journalists’ houses were searched in the last hour. Kabul is now becoming deadly,” a Kabul-based journalist tweeted on Monday. “This is a game-changer for us all. Many have started counting their final hours of life in Kabul. Nobody knows what happens next. Pray for us.”

“Taliban fighters going door-to-door in #Kabul, looking for government employees, soldiers and police, and Afghans who worked with foreign govts and NGOs, several residents tell me,” another journalist tweeted. “Some have been taken away, family members say. In other cases, houses have been searched and documents/weapons confiscated. Taliban also recording names/addresses.”