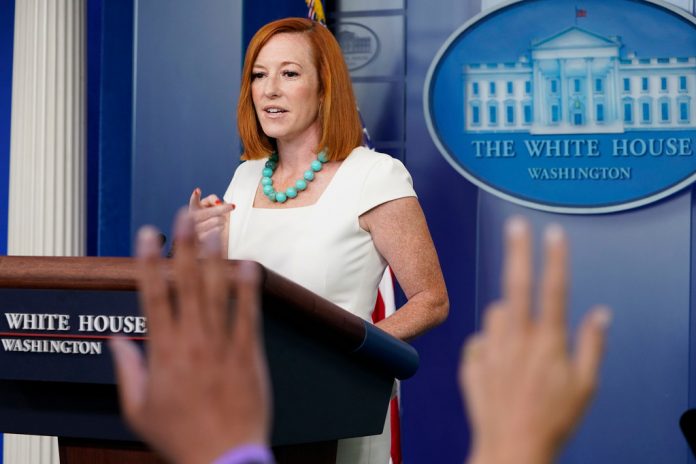 White House press secretary Jen Psaki on Monday announced that the US will retain broad bans on foreign visitors due to the Delta variant of COVID-19.

The restrictions will be extended despite many countries relaxing their own rules to allow US citizens to visit following widespread vaccination.

“We will maintain existing travel restrictions at this point for a few reasons. The more transmissible Delta variant is spreading both here and around the world,” Psaki said at her daily press briefing.

“Driven by the Delta variant, cases are rising here at home, particularly among those who are unvaccinated, and appear likely to continue in the weeks ahead.”

NPR’s Ayesha Rascoe, a reporter, pressed Psaki about the logic behind excluding foreigners when the Delta variant is already the dominant version of the virus.

“The Delta variant is already dominant in the US, so how does keeping people from foreign countries out protect people in the US?” Rascoe said.

“I’m not a doctor or a medical expert. I think that that would best be posed to a member of the CDC or one of our doctors,” Psaki said. “But I think their decision was made based on the fact that the Delta variant is more transmissible and is spreading around the world. Yes, it is the dominant variant here in the United States, but that doesn’t mean that having more people who have the Delta variant is the right step.”

Since January, all travelers entering the US, including returning US citizens, must show that they tested negative for the virus.

The US still bans residents of Europe’s 26-country Schengen Zone, even though other regions of the world have more infections and lower vaccination rates, such as Indonesia, where cases are surging.

Due to COVID-19 concerns, the US bans travel from China, Brazil, South Africa and Ireland.

The CDC last week urged Americans not to travel to the UK due to an uptick in COVID-19 infections there. But Psaki said there was also promising news from the UK showing that vaccines protect people against serious illness.

“The United Kingdom, which is experiencing its own surge in cases driven by Delta, showed hospitalization rates down 73 percent compared to December when there were nearly identical case rates but almost no vaccinations,” Psaki said.

“And what that means is the vaccinations are protecting people from hospitalizations in the United Kingdom, which is a positive sign, and deaths are down 93 percent, further proof that getting fully vaccinated is the best thing anyone can do to protect themselves and those around them.”

According to CDC data, 69 percent of US adults have had at least one COVID-19 vaccine shot. 60% are fully vaccinated.