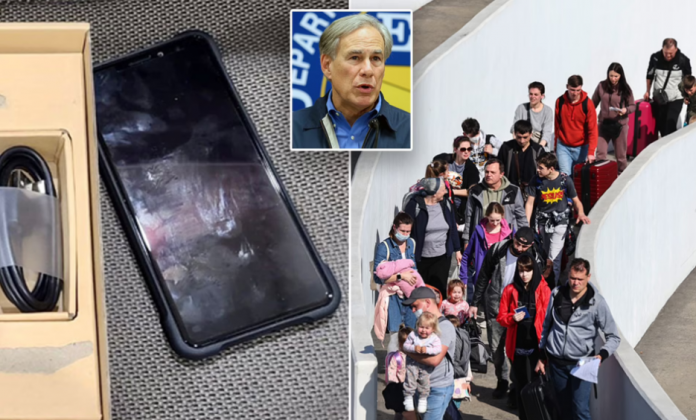 Illegal immigrants are being handed free smartphones, according to White House press secretary Jen Psaki, so that Immigration and Customs Enforcement can follow them more easily.

During the daily press briefing at the White House on Wednesday, Psaki looked irritated by a question from Fox News reporter Peter Doocy.

Doocy confirmed with Psaki that Fox News’ Texas team reported back that the administration is starting to hand out free smartphones to people who cross the borders in the hopes that the administration can use it to track every one of them. His question is, “Which part of that is supposed to deter people from crossing illegally into the states?”

To which Psaki responded rather snarky,  “Well I think you of all people, since you’ve asked a range of questions about this topic over time, would recognize that we need to take steps to ensure that we know where individuals are and we can track and we can check in with them.”

She went on to describe how the migrants’ phones are used to monitor them.

The administration’s Alternatives to Detention Program uses three different types of technology to keep track of those who are enrolled in the program. One of them is Telephonic, which creates a biometric voiceprint from a participant’s voice during the enrollment process. Psaki added that when the participant receives a check-in call, their voice is matched to the person’s voice.

Sources tell me w/ parole releases, the migrants are asked to turn themselves into ICE in a city of their choice. I’m told many of them are given these phones by the government to track them and allow them to communicate w/ ICE, but there’s no way to stop them from being tossed. pic.twitter.com/tAogWloQgy

In the aftermath of their decision to remove Title 42, a regulation that prevented many from crossing the border, the Biden administration is being forced to prepare for what is likely to be a major influx of illegal aliens and asylum seekers.

Texas Gov. Greg Abbott (R) said earlier on Wednesday that state authorities will bring illegal aliens to Washington, D.C., on charter buses and dump them off on the steps of the US Capitol. Biden’s immigration plans were protested at the Capitol.

Sad News For Dems As Senator Might Lose Her Seat

Breaking News September 29, 2022 0
Unsurprisingly, the party responsible for burning down small businesses and rampaging through our cities like the Visigoths while trying to "deconstruct" our...

Breaking News September 29, 2022 0
Even though Jen Psaki wasn't the most pleasant press secretary and occasionally used the irritating "circle back" phrase, she was at least...

Breaking News September 28, 2022 0
Joe Biden has adopted a casual approach toward China since becoming office. The president hasn't held back on his...