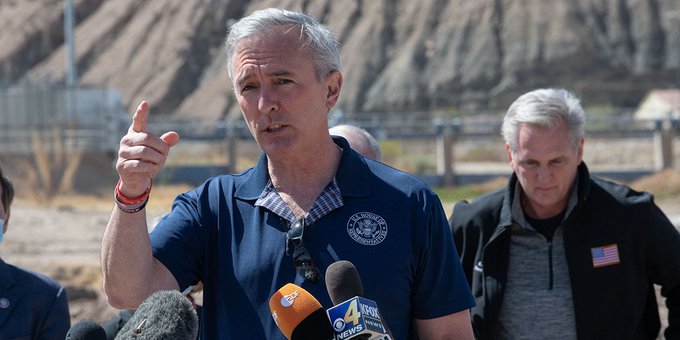 The House Republican Conference on Friday unveiled a comprehensive plan of measures to strengthen physical infrastructure and close asylum loopholes in order to safeguard the embattled southern border if the GOP regains control of the chamber the next year.

Rep. John Katko, R-New York, is the chair of the American Security Task Force, which was established by House GOP Leader Kevin McCarthy, R-Calif., last year to develop policies to address the crisis at the southern border, where there have been more than 200,000 migrant encounters per month since March and more than 1.7 million in FY 2021.

The framework comprises legislative recommendations that Republicans might utilize to win control of the House if they win the midterm elections in November.

In an interview, Katko, the leading member of the House Homeland Security Committee, asserted that the porous border poses a serious security risk, citing a rise in fentanyl-related overdose deaths as well as possible terrorist infiltration attempts.

Legislation mandating that the federal government carry out the border wall’s ongoing construction is the first step in the implementation of new policies. The project had over 500 miles built during the Trump administration when it was abruptly stopped by the Biden administration. As a result, the border fence now has huge openings through which immigrants are pouring into the United States.

The measure would also expand employees for Customs and Border Protection (CBP) and update its technology at both the northern and southern borders. Additionally, money for Immigration and Customs Enforcement (ICEinternal )’s enforcement would be increased.

The Republicans also supported extending the power of Title 42 public health orders, which have been used to evict the majority of migrants at the southern border in response to the COVID-19 outbreak, in order to restrict the flow of fentanyl and other narcotics into the country.