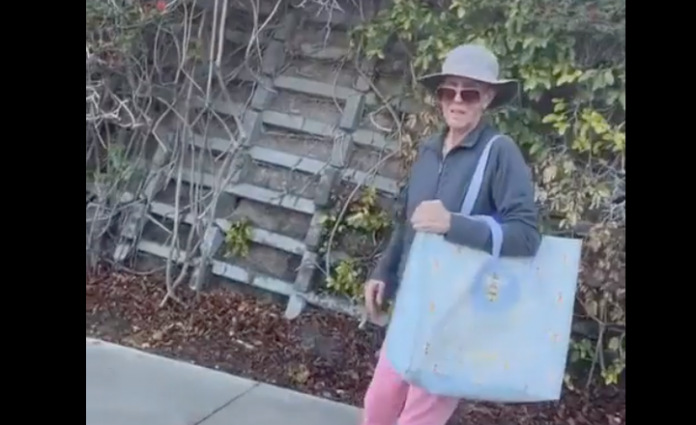 Scott Davison is a grassroots candidate for school board in Carlsbad, California. Like many other Republican candidates, Davison has been complaining of his opponents and/or their supporters stealing yard signs.

For Democrats, it’s a frequent habit. One other type of censorship, albeit a low-level one, is the theft of yard signs. In local races, name recognition is as important as platform stances. For better or worse, some voters just choose who seems familiar for offices they don’t know much about.

According to Davison, sign theft in his school board campaign has increased recently. Not surprising given the hole Democrats appear to have dug for themselves in the last two years with regard to elections.

Enter one brave, social justice warrior, who took it upon herself to save America by stealing the property of Republicans she hates. Fortunately, one of Davison’s supporters managed to capture her courageous efforts on camera. On Monday, the Carlsbad candidate published the video.

An older woman can be seen in the video carrying a large tote bag while strolling along the sidewalk. The bag had an odd “sign-shaped” appearance. She might have been carrying a huge checkerboard. Or a portable dance floor for spur-of-the-moment breakdance competitions?

The driver asks the woman why she took down Republican signs, in particular, one for Republican congressional candidate Brian Maryott (although according to Davison his signs were also taken). Grandma Karen’s response is comprehensive, considerate, and knowledgeable.

Grandma: Because these people are fascists.

Oh. Well then. Carry on.

The driver did not let Grandma Karen carry on, however. He pressed her about her theft.

Driver: I just saw you take the Maryott sign down.

Grandma: Do you want it?

Driver: No, I don’t think you should be doing that. That’s theft, first of all.

In practically every American town, political signs are regarded as property, and their theft is seen as property theft and/or destruction. Since they are “public land,” I assume Grandma Karen feels it would be okay to go vandalize a library or a community center.

When the driver inquires as to why she only removed the Republican signs and abandoned the Democrat signs, she replies:

Grandma: “I took some other signs!”

Grandma Karen actually acknowledges in a video that she grabbed the other missing signs in addition to the Republican ones because she dislikes Republicans. The Democrats are not really sending their best.

Yesterday over a dozen of my signs went missing. A witness confronted the suspect and she admitted to it b/c "these people are fascists."

My opponent's supporters tell people I'm a "liar, bigot, bully" and anti-LGBTQ+. Are we surprised they now think theft is justified? pic.twitter.com/clIRn9vp12

Davison says he has filed a police report with the Oceanside Police Department and his team is currently working to identify the sign thief and have a few leads.