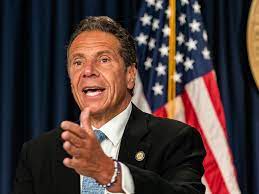 New York Democrat Governor Andrew Cuomo was questioned by investigators for eleven hours last month, as they investigate allegations of sexual misconduct at the governor’s residence and in the workplace.

The interviews under oath were led by former prosecutor Joon Kim, an employment lawyer, and got contentious at times, with Cuomo questioning Kim’s “fairness and independence,” The New York Times reported.

The investigation is nearly complete and a report to New York Democrat Attorney General Letitia James is expected in August, sources told The Wall Street Journal. That report will also be reviewed by New York state legislators in their investigations.

Sources told The Journal that the interview took place at Cuomo’s Manhattan office on July 17. It also included follow up interviews with at least two of his accusers.

The interview session came at Cuomo’s Manhattan office July 17 and included follow-up interviews with at least two of his accusers, sources told the Journal.

Sources said that investigators also visited the governor’s residence and the governors office at Albany’s state Capitol. This is where some of the harassment being investigated took place.

Cuomo denied any wrongdoing, but did apologize for making people feel uncomfortable.

Cuomo publicly shared “concerns” of the independence of the reviewers, a reference to Kim, who has been hired by James and has investigated allegations against Cuomo in his first two terms.

“Is this all happening in a political system? Yes, that is undeniable,” Cuomo said last week.

James also denied the political motives of the investigation. However, she has not ruled out her own ambitions to run for governor. According to the Journal, James is planning a major-dollar fundraiser for Martha’s Vineyard on Aug. 17.

“The continued attempts to undermine and politicize this process are dishonest and take away from the courage and bravery displayed by these women,” James spokesman Delaney Kempner told the Journal.

Cuomo officials did not respond to the Journal’s requests for comment.

“It is obvious that attempts to demean the attorney general serve as well to undermine the investigation and send profoundly negative signals to witnesses,” New York Democrat Assemblyman Charles Lavine, overseeing an impeachment inquiry, wrote in a letter to Cuomo.

James does not have the authority to bring criminal charges against the governor. However, she can refer, as the Journal stated.

“I think many of us are eager to see this conclude, one way or another, and get back to the business of government,” Democrat State Sen. Brad Hoylman, who has called on Mr. Cuomo to resign, told the Times. “But this is the calm before the storm: I think, truly, we’re about to hit the gale force winds of Albany, and it’ll be something to behold.”