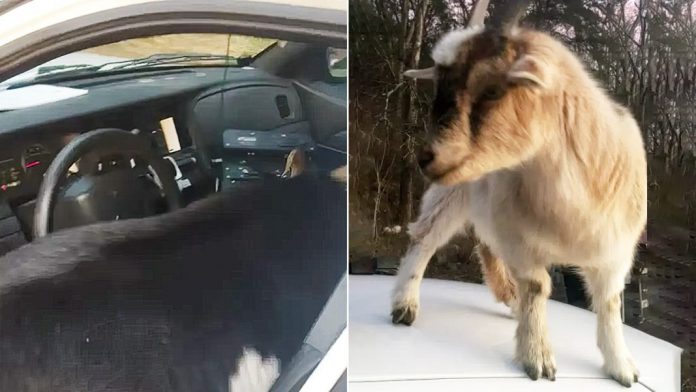 A humorous video captures an Alabama deputy’s dismay upon learning that goats had recently taken possession of his car.

Early on Friday morning, Madison County Deputy Casey Thrower went out to serve legal papers. Goats were scurrying around inside and on top of his car when he got back to it.

One goat can be seen prancing on top of the deputy’s car in a video released by Storyful, while another is seen munching on paperwork while standing in the passenger seat.

Thrower’s response changes from irritation to fury and frustration.

Thrower was managing the goat dilemma when a different incident was reported on the deputy’s portable transceiver, which can be heard going off.

The deputy had an odd explanation, according to the Madison County Sheriff’s Office, for leaving the doors to his police car open.

Deputy Thrower noted that because of the several residences he visits, he occasionally leaves his car door open to prevent hounds from attacking him.

The deputy’s Friday morning disaster was written about by the Madison County Sheriff’s Office with fun, despite the fact that many businesses would be furious about the ruined paperwork.

“Deputy Thrower has been serving the citizens of Madison County for about 40 years and is considered one of our G.O.A.T deputies,” the Facebook post added. GOAT is a popular acronym meaning “greatest of all time.”