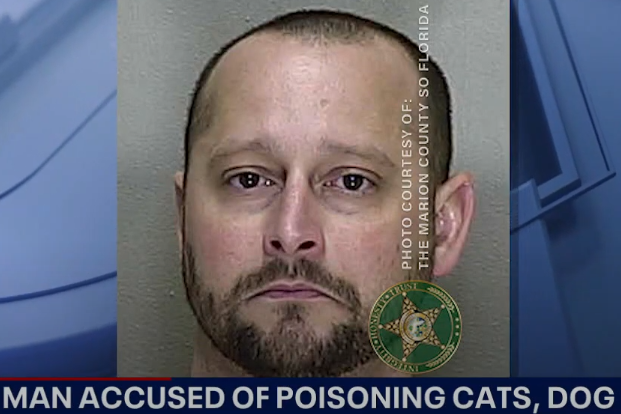 A man from Florida was detained on Wednesday after reportedly poisoning many pets in his neighborhood with antifreeze.

According to the Marion County Sheriff’s Office, Jeremy Gordon Stromwall, 36, of Dunnellon, is charged with four counts of aggravated animal cruelty.

Authorities said the investigation into the unexplained deaths of neighborhood pets began on Dec. 2 when deputies were summoned to a probable case of animal poisoning.

When officers arrived, they discovered that a cat named Mr. Cat had been transported to the Dunnellon Animal Hospital after displaying symptoms of illness and seizure. Mr. Cat died during treatment, and additional testing revealed that he had most likely been poisoned.

According to authorities, Mr. Cat’s owner said that her dog, Bella, died under similar circumstances in October. Another neighbor stated that five cats had perished since October.

Authorities sent in a forensic necropsy expert from the University of Florida College of Veterinary Medicine, who confirmed that Mr. Cat died from ethylene glycol intoxication, implying he had consumed antifreeze.

Necropsies on the exhumed remains of a dog named Bella and two cats named Lil’ Peanut and Tiger revealed that they had also been poisoned with ethylene glycol.

Authorities discovered a bowl containing what seemed to be tuna mixed with antifreeze outside Stromwall’s residence during their initial inquiry. They sent the tuna to the Medical Diagnostic Laboratory at Texas A&M University, which verified the presence of antifreeze in the mixture.

Authorities also learned that Stromwall allegedly admitted to putting antifreeze and rat poison in food to kill the cats in the area.

Deputies said they found three containers of antifreeze, including a nearly empty jar of antifreeze concentrate, as well as many cans of tuna and fish-flavored rat poison, when they executed a search warrant on Stromwall’s residence on December 22.

Stromwall was arrested on a warrant and is being held at the Marion County Jail.

“As sheriff, I am committed to investigating allegations of cruelty towards animals, including pets, livestock, and working animals,” Marion County Sheriff Billy Woods said in a statement. “I am proud of the work that my deputies did in this case and am happy we have gotten some justice for Mr. Cat, Bella, Lil’ Peanut, Tiger, and their owners.”